Well, this nasty passage rears its ugly head once again, that one where King David, a "man after God's own heart," plays the Mafioso don, sleeping around, murdering the husband of the sleepee, and lying through his pearly whites about the whole thing. It is a sordid story, and the nearly three millennia since its writing have done nothing to reduce its horrors. Of course, if you choose to read the Chronicles about all this, you will be sorely disappointed, or richly gladdened, since that 5th-century white-washer just happened to leave all of this out from his cleansed version of Israel's greatest king. If you were to read the Chronicler, all David ever did was write psalms, sing them prettily, and worship YHWH the whole live-long day. But, the joke is on the Chronicler, because despite his best efforts to make David a paragon, the collectors of the sacred texts left all of 2 Samuel 11 in, and the Chronicler has been relegated to footnote status in a few Ph.D. dissertations and to one or two out of context lines that have no bearing on the life of David at all. Good riddance, say I!

I have on at least two other occasions in these reflections on the Hebrew Bible lectionary readings over the past five years or so attempted to give semi-detailed accounts of the spectacular prose that enriches this story and makes it great. I will not do that again. If you wish that, please go into the Patheos archives and find what I wrote then. Today I choose to do something a bit different. I wish to speculate a bit, to surmise somewhat about the question that is plainly not answered in the folds of the Bible that contain this tale. And that question is: just what was David doing on that palace roof late one pleasant spring afternoon and why was he doing it, whatever that "it" was? Are you ready for some suggestive isogesis? Here goes.

We have the facts about the scene we are about to read. It is precisely the "spring of the year, the time when kings go forth to battle" (2 Sam. 11:1a). Battles were fought in Israel in the spring because that was the dry season, after the winter rains, and even snow in some spots, had ended, and the ground was dry, just right for sandal-shod soldiers to gain their footing, the better to swing their axes, loose their arrows, and run unimpeded at the enemy, hoping to remove a limb or two, or, better, a head in order to win a victory for Israel and the YHWH who chose them. In ancient conflict, the king always led the forces. This is made quite clear when the people first ask the aged Samuel to make a king for them, much against his desire. Their demand for a king consists precisely in this: "We are determined to have a king over us, so that we may be like the other nations, and that our king may govern us, and go out before us and fight our battles" (1 Sam. 8:19-20). Kings are defined by their ability and willingness to "go out before the people and fight." But not this time, thinks David. He apparently has had enough of fighting; YHWH knows he has done plenty of it, struggles that have led him directly to the throne of Israel. So, he sends Joab, his faithful general, and all the general's staff officers, and all Israel, the entire force, in order to "ravage the Ammonites, and besiege Rammah. But David stayed in Jerusalem" (2 Sam. 11:1b).

What is David doing in Jerusalem, and why is he lolling on his couch on the palace roof on that late spring afternoon? Now, we may speculate. Oh, I know that the Bible does not speculate; it majors in speech and action, building its characters in that way. But I remain intrigued. Here is another fact about the long account of David's life: with this story David's activity, his insatiable desire for the throne, becomes increasingly passive and withdrawn. After all, the throne, and everything connected to it, are his. He acts in this story, all right, but the actions are all monstrously self-serving, and Israel and YHWH have precisely nothing to do with them. After this scene, David withdraws almost completely, from governing the land, from parenting his children, until finally he dies, pathetically cold in his royal bed, his wife and chief prophet manipulating him into making Solomon king, though the text never says that that was ever his intent.

The text teases us again at verse 2. "It happened, late one afternoon," it says. The Hebrew is the ubiquitous wa yahi, literally something like "and it was." The texts of the Hebrew Bible are littered with this seemingly innocent sentence starter, but there is a certain incompleteness, a kind of devilish anticipation, and terrible randomness in the phrase. "It happened," it says, as if events to follow just occur without thought or plan, making them somehow all that much more appalling. So, a king who is not where he has vowed to be, namely in front of his troops, now engages in a random act on his palace roof without thought or idea in his royal head. The result of all this is chaos and disaster. 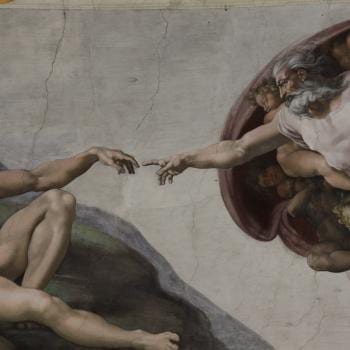 The Divided Man: What We Can Learn From Ravi Zacharias
Esther O’Reilly
3

Where You Are, There He Is
Mary Pezzulo
4

The Saining of Brigit - A Ritual For Candlemas (Imbolc)
Ian Chambers
Get Patheos Newsletters
Get the latest from Patheos by signing up for our newsletters. Try our 3 most popular, or select from our huge collection of unique and thought-provoking newsletters.
From time to time you will also receive Special Offers from our partners that help us make this content free for you. You can opt out of these offers at any time.
see our full list of newsletters
Editor's picks See all columnists