Oh, heavenly days, it is already Advent again! I thought it was about the 15th Sunday after Pentecost, but I did hear the choir practicing tunes that sounded very Christmasy, and somebody was mumbling something about the location of that moth-eaten Advent wreath. Need to get a new one — next year? I know Advent means something about waiting, and I know for whom we are supposed to be waiting, that non-crying baby in a manger or a crib or a cave or a stall or…whatever. Time for the pageants, the candles, the Messiah (both Jesus and Handel, I mean). I will never be ready! And what in the world am I to preach after more Advents than I can count?

Welcome to the world of Advent church and the silent, or not always silent, ruminations of the pastor. I can only hope that your particular church is large enough that members of your capable staff will readily and smoothly handle the myriad details that must be attended to in order to survive the season. But for most of us, the bulk of those details falls to us. And no matter what size of church, we are the preachers, and the eager congregation, often swelled a bit by the season and its joys, will come expecting a word of joy and jollity and fun with a smidgeon of nostalgic seasons past from you, because, after all, that is what all this is about, is it not? This is not the time for injecting your pet political peeves or your discomforting calls for life-changing reformations. Save all that for January when many will not return after the candles have melted and the choirs have stopped with those anthems we all know and all love. Introduce those new hymns then, but keep "Silent Night" and "Away in a Manger" coming; after all, we have been hearing those in the mall for nearly two months now.

What would Jeremiah make of Advent and Christmas? He appears a sourpuss; old "doom and destruction" (Jer. 20:8) was a name some surely gave to him. I doubt he would make much of it at all. He was forever going on about justice and righteousness among the people, continually harping on the need for realignment with YHWH, blasting his fellow Israelites even for going to church and claiming it was somehow the temple of YHWH when their appalling behavior toward one another had turned it into a "den of robbers." Hardly the sort of stuff anyone wishes to hear at Advent/Christmas!

And so the lectionary this year C gives us Jeremiah 33:14-16 to chew on this first Sunday in Advent. Here is what it says in my very literal translation:

Look! Days are on the way, says YHWH, when I will raise up the good word that I spoke to the house of Israel and the house of Judah. In those days, at that time, I will cause to sprout a righteous branch that will make justice and righteousness in the land. In those days, Judah will be delivered and Jerusalem will live trustingly; this is the name it will be called: "YHWH is our righteousness."

The context of chapter 33 makes it plain, at least to some editor or another, that this brief oracle is used as an example of the reality of a perpetual kingship of David and a perpetual Levitical priesthood for the house of Israel (Jer. 33:17-18). Thus, the righteous branch is clearly a Davidic king, unnamed, and the presence of justice and righteousness is ensured by the daily sacrifices of the Levitical priests, "sacrifices for all time," as the text announces.

I admit to being slightly suspicious that Jeremiah ever said such a thing; it bears the decided whiff of a self-serving royal courtier and his comfortable priestly supporters. Images of Billy Graham and Richard Nixon fly into my brain, the former of whom was inexplicably lured into unquestioning support of the latter for far too long a time. Let us put that context aside and focus rather on the short three verses for today.

One way to understand any text, and certainly any biblical one, is to note repetitions one uncovers in a reading. A pronounced repetition fairly screams from Jeremiah 33:14-16. That word is of course "righteous," zedek in Hebrew, and it occurs in three different ways in these three verses. First, as an adjective it modifies the "branch" that YHWH will cause to sprout. No common branch on the tree of YHWH will do; that branch will be a righteous one, perhaps implying that not all the branches from the kingly tree of David have been altogether righteous, beginning with that tree's namesake. David himself, we remember, broke four of the Ten Commandments in one episode during his lifetime (2 Samuel 11), Guinness Book of World Record sin if ever there was such! But Jeremiah promises that this unnamed branch will in fact be (finally?) a righteous one.

The Impeachment On SNL
Andrew Hall
2 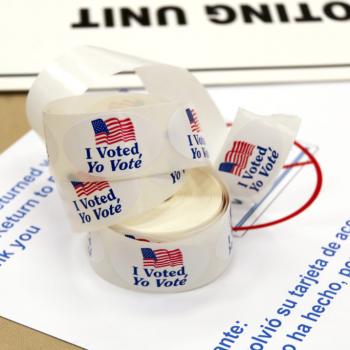 Now Liberals Are Admitting They Manipulated the Election
Gene Veith
4

Black Lives Matter And Mary Lange: God’s Servants Promote The Dignity Of The...
Henry Karlson
Get Patheos Newsletters
Get the latest from Patheos by signing up for our newsletters. Try our 3 most popular, or select from our huge collection of unique and thought-provoking newsletters.
From time to time you will also receive Special Offers from our partners that help us make this content free for you. You can opt out of these offers at any time.
see our full list of newsletters
Editor's picks See all columnists