Eating Your Own Crops: Reflections on Joshua 5:9-12

I do not think I would be far amiss to suggest that Joshua 5 is not a text that naturally springs to mind as an appropriate text for Lent. Well, it does have to do with eating; if you decide this year to give up manna for Lent, then this is your text! And if you think it is past time for you to be circumcised (I apologize to my female readers), this could be your text. And if you are hankering for some unleavened cakes and some parched grain, surely both foundational for that primitive diet you are craving, this may be your text, too. Even given those possibilities, Joshua 5 in Lent seems to be a stretch.

We Christian preachers would more obviously turn to 2 Corinthians 5 and its talk of "new creation" or even better Luke 15 and that quintessential parable of the two brothers. Why would any preacher in her right mind decide to expound this tiny bit from Joshua, especially when two classic New Testament texts are on offer? May I admit something to you? Even this Hebrew Bible nerd would be hard pressed to pass over 2 Corinthians and Luke 15 and rush headlong back into old Deuteronomic Joshua. Even the Hebrew text presents few linguistic challenges that might energize a hopeful reader. Then, why Joshua at all?

The reason this text holds interest for us 21st-century types centers in its concern for the second generation of Egyptian escapees. And, by extension, it focuses our interest on those among us who are coming at this Christian thing afresh. That group includes new believers as well as older Christians who are anxious for a new look at things that may have become stale over the years.

The author of Joshua, who is obviously heavily influenced by 8th/7th-century Deuteronomy, is recounting the story of the Egyptian escape and the subsequent entrance into the land of promise. Joshua 3 tells of the dramatic crossing of the River Jordan where the "waters flowing from above stood still, rising up in a single heap far off at Adam, the city beside Zarethan, while those flowing toward the sea of the Arabah, the Sea of Salt, were completely cut off. Then the people crossed over opposite Jericho" (Josh. 3:16). This rather precise geographical portrait pinpoints the Israelite crossing at a quite recognizable location. There was in times past an Adam bridge some ten miles north of Jericho that crossed the Jordan, and the infamous Allenby Bridge of more recent time — that once served as the crossing point from Jordan to Israel before a treaty was forged between the two countries making such a crossing far easier — stands very near the Beth Arabah, just south of Jericho in the Jordan. Of course, the Joshua author here duplicates at this site the great miracle of the Sea of Reeds, that event that serves as the hallmark of YHWH's choice of and presence with the people.

Once Israel has passed over the Jordan near Jericho, they set up twelve stones as a memorial for their safe passage near a place they call Gilgal. At least five places with this name are mentioned in the Hebrew Bible, but this one is obviously near Jericho. The name means apparently "circle of stones," a sort of Stonehenge in Israel. The verb gll in Hebrew means "to roll," so stone circle is a very likely picture. Ancient stone circles are ubiquitous throughout the world, so this very old picture is a likely one.

Now in chapter 5 the author turns to two ancient traditions that have made Israel unique in the world, or at least unique in their own minds. The first is circumcision. The fact that this practice of cutting off the foreskins of male infants as a sign of community membership is not unique to Israel should not downplay its importance for this people. There is clear evidence that many Northwest Semitic peoples as early as 3000 B.C.E. practiced circumcision. The Egyptians themselves also practiced the rite at least among certain privileged males as early as 2300 B.C.E. But it was Israel that enriched and made prominent this practice, sustaining it right up to the present day. So the author of Joshua is very concerned that the people now entered into the land of promise be circumcised. He states that all those who escaped Egypt, those warriors and leaders who wandered in the desert for forty years, were all circumcised, but their children and grandchildren were not. Those older exiles, he says, "did not listen to the voice of YHWH" (Josh. 5:6) so were not allowed to enter the land. Their children were raised up in their place, and so now had to be circumcised.

The second practice crucial for Israel is the celebration of Passover, the ritual memorial to the escape from Egypt by the miraculous power of YHWH. But the Passover could not be celebrated correctly until the land of promise had produced its first crops, since unleavened cakes are necessary for a proper celebration. And Joshua claims that "on the very day that they ate the produce of the land," the unleavened cakes and the parched grain, the miraculous manna of YHWH, that amazing stuff that had sustained them in the wilderness for those years of wandering, ceased; there was no more to be had.

Trump’s "Big Lie" a weapon of mass destruction. Why is he still free?
Rick Snedeker
3 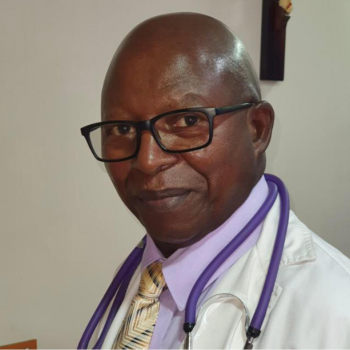 Kenyan Doctor Who Discouraged Getting the COVID Vaccine Dies of COVID
Hemant Mehta
Get Patheos Newsletters
Get the latest from Patheos by signing up for our newsletters. Try our 3 most popular, or select from our huge collection of unique and thought-provoking newsletters.
From time to time you will also receive Special Offers from our partners that help us make this content free for you. You can opt out of these offers at any time.
see our full list of newsletters
Editor's picks See all columnists