A Bargain with YHWH? Reflections on Psalm 30

Psalm 30 presents the believer with a genuine dilemma concerning the proper way to approach God while one is in distress. The editorial, italicized heading for this psalm in my NRSV reads "Thanksgiving for Recovery from Grave Illness." I suppose that that summary is a reasonable conclusion to be drawn from the descriptions found in the poem of the poet's "healing" in verse 2 and "having a life brought up from Sheol" in verse 3. But that does not point to the dilemma that I find in the psalm, that is the discovery of just what was the human problem that called for the poem. Gratefulness to God for healing is a perfectly acceptable, indeed a fully appropriate response to an experience of recovery from sickness or saving from any sort of extreme pain or suffering. My problem appears in verses 8-10 (vss. 9-11 in Hebrew).

To you, YHWH, I called;
to the Lord, I pled:
"What profit in my blood,
in my going down to death?
Will dust acclaim you?
Will it tell your truth?
Listen, YHWH, and grant me grace.
YHWH, become helper to me."

In the attempt the psalmist makes to save her life, she asks a most interesting question of YHWH. (A quick word about my use of the female pronoun here for the psalmist. In several places in the Hebrew Bible, it is the women who are described as singing the songs of praise and victory. Thus, it may well be that certain of the poets of Israel were in reality female.) I might only hear the words as raw bargains with God. The first question is: "What value is it for you, God, or for anyone if I die?" Does God gain anything from the death of a faithful servant? Later in the book of Job, this question will be asked with increased bitterness as the sufferer wonders whether God not only wills human death but rather enjoys the demise of God's creations (Job 9:22-24). Does God actually gain from human death?

The second question pushes the envelope even further: "Do you, God, get any praise from those who have been reduced to dust? Can these dead ones proclaim your great truths anymore?" The answer to these rhetorical questions is plainly no. The dead in fact do not and cannot praise YHWH. This belief is not surprising when one remembers that Sheol (see vs. 3) is the place in the Hebrew cosmology where all go when they die, whether they are good or bad or short or fat or tall or thin. According to the extended picture of Sheol in Job 3, the population of the place of the dead do nothing but exist in some sort of shadowy way, forever separate from the horrors and the joys of earthly life. This place is neither heaven nor hell in any sense as we may have thought of it. It clearly is a spot to be avoided as long as one can, and it is also a place cut off from God. Psalm 30 thus stands right in the face of Psalm 139, which states clearly that no place is separate from YHWH who in fact is found in the highest places in the sky and in the deepest places of Sheol.

The psalmist thus demands that YHWH save her life from death, but does not merely plead generally nor simply throws herself on YHWH's good graces. She has reasons for her desire to live, and those reasons have to do with what YHWH will lose if she dies! YHWH will find no joy in her death, and in addition YHWH will lose another worshipper, one who can neither praise YHWH anymore nor proclaim the power of YHWH's truths. She drives a hard bargain with the Almighty, and has no intention of giving in to death without a struggle with God.

Just how are we moderns to understand this bargaining game with God? I suggest that it is quite a different sort of bargain than the ones certain modern believers make with God. "If you let me survive this, God, I will never take a drink again," some say. "If you let me live, God, I will go to church faithfully." "If only I can be allowed to live, God, I will be a better father." These are personal bargains that have been made for centuries by persons facing extreme circumstances. But these bargains are not the bargains of the author of Psalm 30.

This poet takes very basic understandings of the universe, shared by all those who are hearing the poem, and uses them as leverage against YHWH in order to ensure that YHWH will intercede on her behalf. But at the same time she promises YHWH that the future of her life will be characterized by continuous praise of YHWH and constant proclamation of YHWH's great truths. Her recovery, her saving, will not be for her benefit alone, but for YHWH's ongoing requirements of a life lived for YHWH.

It may well be that this possibly crude sounding bargain is a Hebrew substitute for a much older and more pagan notion that without living supplicants, the gods would die, since those supplicants actually provide food for the gods. This is the idea that drives the old Germanic Niblelungenlied, made memorable in Richard Wagner's titanic four opera masterwork, Der Ring des Nibelungen. In the first opera, the goddess Freia is stolen by the giants, who have not been paid for building the great fortress Valhalla for the gods. But Friea it is who provides golden apples for the gods to live on. They sicken and come close to death, forcing Wotan and Loge to steal the gold from Nibelheim to pay the giants off. Perhaps such an odd notion lies below this bargain from the author of Psalm 30: without worshippers, YHWH is doomed to rule alone and without offerings. It may be that that striking notion in Genesis 8, when Noah sacrifices to YHWH after the great flood recedes, and when YHWH "smells the pleasing odor" of that sacrifice, is also an ancient reference to the idea of the need of the gods for human offerings. 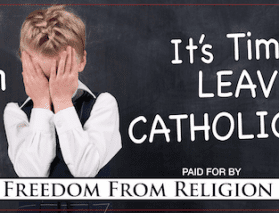 Catholic guilt: A reflection on the familiarity of shame
Freedom From Religion Foundation
4 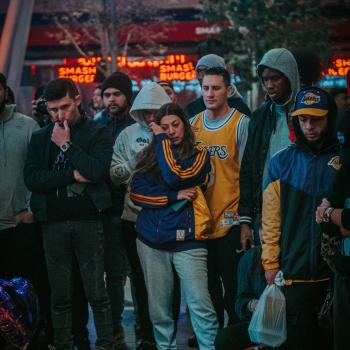 Everyday Horror, Everyday Thankfulness: Evil & the Death of Officer Bohannon...
Hal Bush
Get Patheos Newsletters
Get the latest from Patheos by signing up for our newsletters. Try our 3 most popular, or select from our huge collection of unique and thought-provoking newsletters.
From time to time you will also receive Special Offers from our partners that help us make this content free for you. You can opt out of these offers at any time.
see our full list of newsletters
Editor's picks See all columnists