There is little mystery about why Ezekiel 37 shows up toward the end of our Lenten journey; it has long been interpreted as hinting at, or outright announcing, some sort of resurrection from the dead. Well, to be blunt, it does not! It is about new life all right, in the power of the spirit of YHWH, but it is not about my coming back to life after I have died, nor is it about your coming back to life after you have died. Sorry about that! But it remains a most valuable text to think about as the cross of Jesus looms on that terrible hill.

There is much debate about exactly when Ezekiel had his prophetic say. Many assume that he was transported to Babylon during the first exile of Israel, very early in the 6th century B.C.E. His several references to flying back and forth from Babylon to Israel suggest a very active imagination, perhaps rooted in a forced Babylonian sojourn paired with a deep memory of an Israelite homeland. However the exact historical provenance is decided, there can be little doubt that Ezekiel was witness to the slow and inexorable dissolution of his home, first in 597 and later a far more cataclysmic event in 587/586 when Nebuchadnezzar finally had had his fill of Judean recalcitrance and reduced Jerusalem to a smoldering rubble. When Ezekiel famously conjures up "dry bones," he knows whereof he speaks.

Then, too, Ezekiel would be a fascinating patient for a Babylonian Freud; he sounds distinctly disturbed in more than a few of his oracles. Beyond his night flights to Jerusalem, he dabbles in raw sexual imagery (Ezek. 23), a refusal to mourn even at the death of his wife (Ezek. 24), not to mention the wild vision of the "wheels within wheels" that he records in Ezekiel 1. Little wonder that he has not been a favorite prophet among later commentators, though his book is one of the longest we have in the canon. Yet, Ezekiel 37 has been a favorite with centuries of Christian readers and has spawned a very well-known spiritual (that I am sure you are singing right this minute!).

But now the text. "The hand of YHWH came upon me, bringing me out by the spirit of YHWH and setting me down in the middle of a valley; it was full of bones" (Ezek. 37:1). The vision begins in a nightmare. An unnamed valley stuffed full with bones is hardly a place one chooses to be. The prophet soon learns, after he is led around the vast number of bones by the spirit (or "wind" or "breath"), that these are very dry bones indeed. Dry bones mean that they have been there a long time. How are we to see this vision? Is the valley a place of a terrible battle, now forgotten, where many soldiers died, their bodies desiccated in the blast furnace of the desert? Is it some kind of monstrous cemetery where the bodies of the dead have not been well buried, but exposed to the elements and the carrion creatures that feed on lost carcasses, picking the flesh clean, leaving only the dry bones?

Whatever image floats to mind, it is horrendous. And then the spirit asks an astonishing question: "Mortal (older translations read "son of man" here, a more literal reading, but one potentially misleading, given the later Christian connection with a title given to Jesus in the gospels), can these bones live?" If I join the prophet in his loathsome valley, I know what my answer would be: "Are you kidding? Dry bones are just that, dry and dead." Ezekiel is more circumspect, as he answers, "YHWH God, you know" (Ezek. 37:3). I suppose that is always the safe response when God asks something of us. But YHWH is having nothing of Ezekiel's passing of the buck. "Prophesy to the bones and say to them, 'Dry bones, hear the word of YHWH!'"

I imagine that more than a few of you preachers reading this are thinking to yourselves, "I know about this, because I preach to a whole pile of dry bones every Sunday!" That may be more or less true, but Ezekiel really does have the harder task. His congregation is actually a heap of dry bones, and the success of a preaching mission appears rather slim. This makes even Jonah's Ninevite congregation not so bad; at least they are alive! But YHWH promises a Frankenstein-like result for this sermon: sinews and flesh and skin and breath will cause the bones to live, "and you shall know that I am YHWH" (Ezek. 37:6).

So Ezekiel gives it a whirl, and sure enough, the silent valley is awash in the noise of rattling, as the bones begin leaping and dancing about. Soon they are covered in fresh sinew, adorned with layers of flesh, covered finally with pink skin. But the new creatures were not yet alive, since there was as yet no breath in them. So, YHWH commands a second sermon from the prophet, this one directed to the breath, the spirit, the wind. "Breathe on these slain, that they may live" (Ezek. 37:9). Standing before the astonished prophet, after the breath has appeared and entered the creatures, is now "a vast multitude" of living human beings. The dry bones are now alive, thanks to Ezekiel's willingness to preach with the power of the spirit of YHWH to a pile of dry bones. 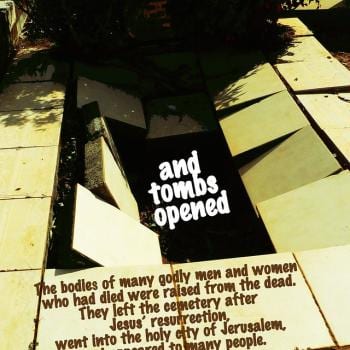 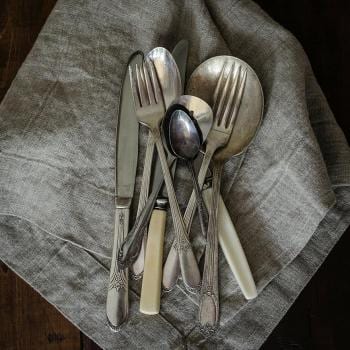 Pondering Life While Sorting Silverware
Mark Wilson
Get Patheos Newsletters
Get the latest from Patheos by signing up for our newsletters. Try our 3 most popular, or select from our huge collection of unique and thought-provoking newsletters.
From time to time you will also receive Special Offers from our partners that help us make this content free for you. You can opt out of these offers at any time.
see our full list of newsletters
Editor's picks See all columnists