Closed Ears and Lazy Tongues: Reflections on Palm Sunday/Liturgy of the Passion

Lectionary Reflections
Isaiah 50:4-9a
March 20, 2016
Palm Sunday/Liturgy of the Passion

This fascinating text has long been known as the third song of the Suffering Servant, joining Isaiah 42:1-4, 49:1-6, and the most important of the songs for Christians, Isaiah 52:13—53:12. As such, Isaiah 50 has long been read as one more text attempting to delineate the work and suffering of Jesus of Nazareth some 600 years after Isaiah wrote his words to the Babylonian exiles of Israel. When confronted with a text like this one, I am always tempted to essay an interpretation of what Isaiah was saying to his colleagues in the 6th century B.C.E. in Babylon, over against the later Christians who borrowed his words and applied them willy-nilly to the one they came to call Christ/Messiah. And I suppose as a scholar of the Hebrew Bible, what I will say here smacks of that defense; YHWH help me, I can do no other!

But what intrigues me this day about this passage has less to do with a defense of its uniquely Hebrew hearing than with an issue that affects all of us, Hebrews and Christians alike. And that has to do with the central metaphor of Isaiah 50:4-5. We have heard texts like this one for so long, and we have heard it in the liturgical context of Palm/Passion Sunday for so long, it is possible that the poetry has slipped from us in our attempts to make sense of the crucial theological ideas that Isaiah is here presenting. Yet, the poem is about hearing and being taught. Here are the words the poet offers.

The Lord YHWH has given to me the tongue of those who are taught,
in order that I might buoy up the weak with an awakening word.
Morning after morning YHWH awakens my ear to hear those who are
taught.
Lord YHWH has opened my ear, and I was not rebellious, backward I did
not turn.

The language of the poem is not readily grasped; it is a subtle thing that Isaiah appears to be doing. Whoever YHWH's servant may be has been endowed first with a tongue designed to sustain the weak and weary with a word that awakens them. Since we are in the exile here, I can only imagine that this awakening, enlivening word is offered to these weary ones in order to wake them up to the reality that YHWH is still with them, despite all evidence to the contrary.

And this awakening tongue is not one that prattles on without knowledge or wisdom; the tongue has been taught by YHWH and is thus not speaking foolishness or pabulum. Nor is this well-taught tongue merely speaking only what it has already learned. YHWH, morning after morning, awakens the ear of the speaker, enabling her to hear even more from those who have been taught. The speaker is apparently one of many students of the ways of YHWH and feels obligated and called to hear sound teaching day after day.

And the speaker refused to stop listening, refused to turn away from ever new lessons from those taught by YHWH. She was not a rebel, did not rely merely on what she had been taught before but continued to learn, filling her tongue with fresh thought and new ideas offered by YHWH and by YHWH's pupils. She kept at the task of learning and speaking, never allowing herself to speak old platitudes but filling herself with the new things of YHWH, who is always in the business of doing new things, as Isaiah announced so powerfully in 43:19.

This stark refusal to stand only on ancient promises, untested in the new day of exile, allowed the servant to "give my back to those who struck, and my cheeks to those who would pluck out my beard; I did not hide my face from insult and spitting" (Is. 50:6). Here the dual metaphors of hearing and speaking come to a richer fruition. Learning and speaking the truths of YHWH make it possible for servants to stand their ground against any who would challenge that which they know to be correct and true. Insults and spitting, two terrible attacks of the ancient world, can be endured when the one attacked knows fully the great truths of the living God.

I am now reminded of the quite dreadful political season that we citizens of the U.S. are attempting to withstand and survive. There remain, incredibly, some ten months to go before we may vote for a new president, though it seems we have been in the midst of slander, assault, and 8th grade food fights for far longer than that. I long for a well-trained tongue, one steeped in the ways of God, one continually taught the truth, to speak that truth into our world which is so desperately in need of that truth. But what I have heard in the main has been tongues loosened by foolishness and pique, attached to closed ears, crammed with the wax of half-truth, innuendo, and outright lies. Watching the so-called "debates," especially on the Republican side, has been a very dispiriting exercise, forcing me to echo the prophet, "How long, O YHWH, must your people suffer shame?"

Why Do I (or How DARE I?!) Critique Deconversions?
Dave Armstrong
2 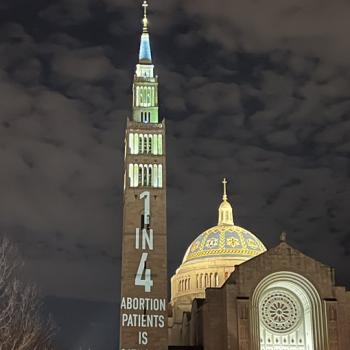 Catholics For Choice is not logically possible
Mark Wilson
4 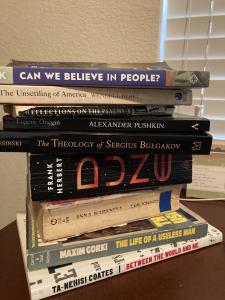 The Best Theology Books I Read in 2021
Anthony D Baker