An increasing amount of attention is being given to ministers who lose their faith. In less than a year NPR, CNN, MSNBC, The Washington Post, The Religion News Service, and ABC Nightly News have featured stories about "preachers who don't believe."

At first blush, given the numbers involved, the level of interest in the subject is surprising. Even "The Clergy Project," an organization formed to assist those who are confronting a crisis of faith, reports that it has all of 240 members. That's hardly a tsunami and it's hardly anything new.

There are probably a lot of reasons for the media's interest in the subject: Even with a global economic crisis, a few wars, and a presidential election, there are always a few slow news days. "The Clergy Project" probably has a fabulous PR department, supported as it is by The Richard Dawkins Foundation, Freedom from Religion Foundation, American Atheists, the American Humanist Association, The Appignani Foundation, The Center for Inquiry, The Military Association of Atheists and Freethinkers, and Recovering from Religion.org. And beyond garden variety religious fervor, there is no religious fervor like that of a former believer. So, it's the kind of story that always draws a crowd.

But the stories are out there. Clergy do lose faith. So, "Why do clergy stop believing?"

In one sense there are probably as many answers to that question as there are people whose journeys end this way:

Some clergy who stop believing never did believe.

People enter ordained life for a variety of reasons. Some simply want to "help other people." Some enter seminary looking for answers to their own questions, never quite get an answer, but don't know what else to do. Whatever thin veneer of faith some people bring with them into the ministry, life erodes it fairly quickly.

Some fail to believe at all or struggle to continue believing thanks to churches themselves.

Far too many congregations do little or nothing to teach their members the Christian faith, or they teach them a brittle, fragile version of it that is bound to fail. The same could be said of some seminary educations. G.K. Chesterton famously observed that the problem for many people is not that they are "tired of Christianity," the problem is that "they have never found enough Christianity to get tired of."

Some struggle with immature and simplistic assumptions about God, providence, and suffering that persist long after they have pursued a formal education.

Those understandings are often not the product of mature adult reflection, but childhood memories and experiences. But after years of pastoral counseling and spiritual direction, I've concluded that it is hard to overestimate the impact that childhood experiences have on our spiritual lives, particularly if we are not helped to name and confront them.

Some struggle to integrate what they have learned in seminary.

It is one thing to study theology, church history, and Scripture. It is another thing to integrate that learning with our faith journeys. Not all seminary programs (and very few churches) make the effort to help students with that process. But in some ways it is both more demanding and critical to the well being of clergy than is the acquisition of knowledge about the subject.

Others stop believing for a deeper reason. There is a difference between studying God and experiencing God.

The former is never enough. The latter is absolutely essential.

But a failure of faith is not always traceable to intellectual reasons. Some clergy cease to believe because life in the church is hard.

Church life can leave clergy isolated, beleaguered, and disillusioned, struggling with institutional conflict in relative isolation. The disparity between the theological descriptions of the church and the reality that is the church can have a corrosive effect on the faith of its leaders, even though the church, like the world, is filled with sinners, clergy included. And I have worked with priests and pastors at every stage of their ministry who have given up on church, if not God, for just that reason.

Others fail to reckon with the fact that questions of meaning, morality, and value are not just a religious problem. They are part and parcel of the human experience.

No adult has an answer to life's ultimate questions that cannot be challenged, but some abandon their faith in the illusion that the struggle can be avoided, or that certainty is available somewhere else. Others confuse the descriptive power of science with explanatory power. Science is a powerful tool and it can account for the causal associations between the natural forces at work in our world. But it is limited in its ability to explain why those forces exist or why they necessarily interact the way they do.

No doubt there are other reasons clergy lose their faith. 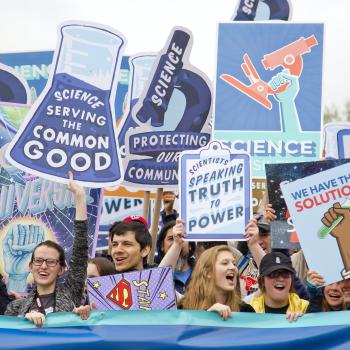 Forgetting the Big Questions
John Ehrett
Get Patheos Newsletters
Get the latest from Patheos by signing up for our newsletters. Try our 3 most popular, or select from our huge collection of unique and thought-provoking newsletters.
From time to time you will also receive Special Offers from our partners that help us make this content free for you. You can opt out of these offers at any time.
see our full list of newsletters
Editor's picks See all columnists