As I promised last week, I will today finish my retelling of the extraordinary story of Ruth, a tale that can only be fully understood by reading the whole thing. Thankfully, the lectionary collectors have recognized that fact, and have urged us to read all four chapters. They did, I think quite rightly, exclude 4:18-22, a rather odd genealogy that details the summation of 4:17 where David is designated as Ruth's great-grandchild. But these are trifles. On to the story!

Ruth has rather mysteriously determined to remain with Naomi in Bethlehem, and has sealed her startling conviction to do so with the magnificent speech of 1:20-21, therewith offering Naomi her past, present, future, and eternity in death. They have arrived in Bethlehem ("house of food") at a most propitious time; it is the very beginning of the harvest of the crucial barley crop. The famine of food has indeed ended! Now, what about the family famine, the lack of male relatives to ensure the continuation of the line of Naomi's husband, Elimelech?

Very surprisingly, the story immediately introduces us to a male relative of Naomi's, a "kinsman on her husband's side," a man named Boaz. We recall Naomi's argument on the Bethlehem road that she in fact had no relatives, attempting to force Ruth and Orpah to go back to Moab where they might find Moabite husbands. Was Naomi afflicted with momentary amnesia on the road (we will later discover that she has still another male relative even closer than Boaz!), was she so grief stricken that she merely forgot the men in her family, or was she just lying to get the two girls off her back? We can never solve that puzzle, but the fact is that Naomi has ample relatives who might serve as possible mates for Ruth.

And Boaz is an excellent candidate. Though the NRSV tells us he is a "rich" man, the Hebrew may or may not imply that. It says he is an "ish chayil," perhaps a "man of quality and strength." Ruth herself will later be termed an "ishah chayilah," a woman of the same qualities; that connection appears to be more important than a question of money. Ruth tells her mother-in-law, very soon after they have settled down together in the city, that "I am going today to a field and glean among the ears of grain in the presence of someone in whose eyes I will find favor" (Ruth 2:2). The NRSV translates as if Ruth asks permission of Naomi to go and glean ("Let me go," it says). That is a possible reading, but I find Ruth rather more assertive here, a quality that will come up again and again in the story. Naomi in rather desultory fashion answers the statement, "Go, my daughter." One imagines the saddened and depressed woman speaking quietly, essentially uninterested in what Ruth or anyone else proposes to do.

What Ruth is about to do is very risky. She is a foreign widow, unknown to anyone in her new community. She simply heads out of her hut for a difficult labor of gleaning in a field of a person she does not know, hoping against hope that the man will be at least partially sympathetic to a woman in such a straightened position. Gleaning is a technical term in Israel; it is in short the Israelite welfare system. When hired workers pass through the field for harvest, they are allowed to bundle the grain they have cut, but of course they are bound to miss some of the grain in their work. That grain, fallen on the rows of the field, are to left alone, not bundled in a second pass through the field, but left for the poor: the widows, strangers, foreigners, orphans, all those who have no direct access to the society in which they live. It is a most difficult and meager way to try to survive, but as a foreign widow, Ruth has little choice.

But great fortune is on her side, because she has happened (Ruth 2:3) to come to a field belonging to Boaz, already described to us as a man of quality. His eye quickly falls on Ruth as she labors in his field, picking up the small leavings of the harvesters. "Whose woman is this?" he asks in his most patriarchal way, assuming that all women must belong to some man. After being informed by his overseer that she is the widow Ruth and has returned from Moab with Naomi, Boaz surprisingly speaks to her, telling her in effect that she is more than welcome in his field and warning her that she should not leave his protection and glean elsewhere lest she be molested by other rowdy men (Ruth 2:8-9). He further invites her to drink from the jars of water reserved for his hired men if she suffers thirst. This, my friends, is a very rapid social climb! She is a complete nobody that morning as she appears in Boaz's field to glean, along with numerous other very poor people, and now she has not only been spoken to by the master of the field, but has been invited to drink water saved for the hired hands.

When Was the Cold War?
Philip Jenkins
3 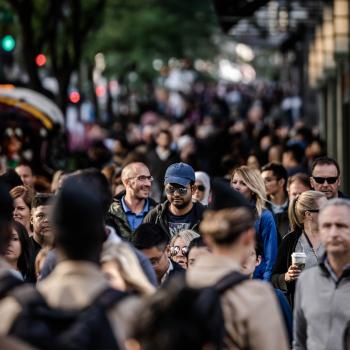 It's Not Christ-like to Ignore Suffering
Karl Forehand
Get Patheos Newsletters
Get the latest from Patheos by signing up for our newsletters. Try our 3 most popular, or select from our huge collection of unique and thought-provoking newsletters.
From time to time you will also receive Special Offers from our partners that help us make this content free for you. You can opt out of these offers at any time.
see our full list of newsletters
Editor's picks See all columnists