God Has Made Laughter For Me, Sorry About You! Reflections on Genesis 21:1-18

Today we hear a slice of that rich family saga of Abraham and Sarah, the patriarch/matriarch of Israel, the founding couple of the people of YHWH. It is nothing less than remarkable that it is precisely this cockeyed pair that serve as the forebears of God's chosen ones. The Holy Family they are not! We Christians have been steeped in the portraits of Mary and Joseph, parents of the savior, Jesus, with their golden crowns, their patient and struggling waiting for the holy birth in circumstances of pain and danger. Yet, both Abraham and Sarah offer a very different picture. Somehow, that picture is far more familiar to us if we are willing to face its hard truth.

Abraham is, not to put too fine a point on it, a weaseling pathetic little twit. He receives the promise of YHWH and is sent to the land of hope, taking with him his aging wife and his nephew Lot. No sooner has the tiny family arrived in that land that they are faced with a terrible, if familiar, crisis. There is a famine, and food must be sought in the place where food is almost always to be found, Egypt, with its wonderfully regular gift of the river Nile. Abe and Sarah wisely decide to head west to Egypt, but before they enter the land, Abram (he is named Abraham later in the story) devises a nasty little scheme, a plot that is designed for one purpose—to save his own skin. "Say you are my sister," he says to Sarai (she is named Sarah later in the tale), so that it may go well with me and that my life may be spared because of you." If this sentence were not Holy Writ, we might take it for a self-serving lie. Well, Holy Writ or no, let's call it what it is: a self-aggrandizing bit of prevarication on the part of the patriarch. And even that later retelling of this story in Genesis 20, wherein Sarah is described as being Abe's half-sister, does not vitiate the obvious lie that this Genesis 20 statement is: Sarah is plainly not Abe's sister; she is unequivocally his wife.

Pharaoh swallows the lie and quite innocently grabs the lovely Sarai for his harem. But he soon discovers that Abe has in fact lied and hands Sarai back to her husband. The great story of God and the chosen people has gotten off to a most ignominious start! Of course, that long story pivots on the reality that Sarai can have no children; she is barren, as Genesis 11 drops into the tale almost as an afterthought. But YHWH has vowed that from the loins of Abraham and the womb of Sarah will arise a "great nation" (Gen. 12). Just like the YHWH of the Bible to choose one of the Middle East's infertile couples to ensure a great nation!

And yet here is the beginning of the point of the story; human beings on their own have a tendency to muck things up in the most appalling of ways. As Abe and Sarah approach the Nile, he lies about her. And so we tend to do when left to our own devices; we are usually far more concerned with our own lives than with the lives of others, even those we claim to love.

So we ought not be surprised that after the exhausting wait for a child of the promise to be born, after Abe is one hundred years old and Sarah not far behind, that instead of universal and continual joy and pleasure at the miraculous birth we get instead more pain, more anger, more self-serving behavior. This time it is Sarah's turn. Well, the story of the birth begins joyfully enough. When YHWH shows up at the patriarchal tent at the oaks of Mamre, disguised as one of three desert travelers (Gen. 18), God promises Abe that when the spring comes around next year, Sarah will have given birth to a son. Upon hearing that promise, Sarah, listening at the tent flap, chortles delightfully to herself; "Shall I, an old woman have pleasure?" The days of sexual delights are over, she rightly thinks, given her and her husband's prune-faced visages. But, surprise, surprise, it happens as YHWH had said. The crabbed couple has a son, and Abraham names the boy Isaac, which in Hebrew means laughter. What else would you call a child if you had one when you were a hundred years old?

So the camp is filled with gales of laughter as Abraham and Sarah and all those with them delight in the astonishing birth. However, there is another child in the camp, Ishmael, the child of Abraham and Hagar, Sarah's much younger and far more comely Egyptian maid. Well, that child was Sarah's own idea, we remember, the result of Abe's and Hagar's tryst when it appeared likely that Sarah would never have a child of her own. But all that has now changed, as Isaac plays at the feet of his mother.

One day, Sarah sees Ishmael "playing," and she cannot stand his very existence. The delicious irony of the story is that the word often translated "playing" is more literally "laughing," the same word on which the name Isaac is based. Now laughter has turned to fury and rejection. Sarah demands that Abraham "throw out that child and her slave mother, too." The narrator claims that Abe is "angry on account of his child," but makes it none too clear exactly which child he means. Neither is the source of that anger very clear either; is he mad at the child or at Sarah or at himself for the whole mess? Whichever it is, he gives Hagar a bit of bread and water and drives her and her child, Ishmael, out of the camp, dooming them to a terrible death in the desert. Once again, Abraham refuses to defend someone he supposedly loves, while Sarah demands that any rival for the promise of her son, Isaac, most be disposed of. Thank YHWH, Ishmael is spared, due to the gift of God, but no thanks to the foul couple, Abraham and Sarah. 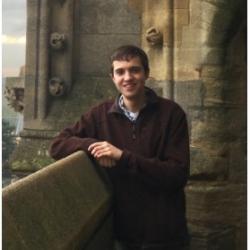 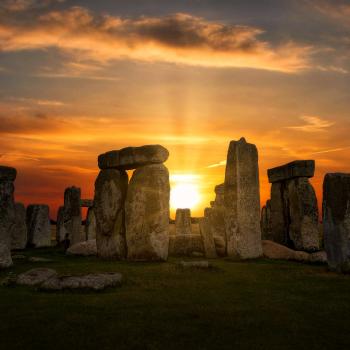 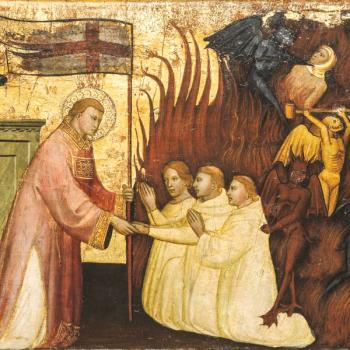 Some Thoughts On All Souls Day
Mark Wilson
Get Patheos Newsletters
Get the latest from Patheos by signing up for our newsletters. Try our 3 most popular, or select from our huge collection of unique and thought-provoking newsletters.
From time to time you will also receive Special Offers from our partners that help us make this content free for you. You can opt out of these offers at any time.
see our full list of newsletters
Editor's picks See all columnists