To Hell and Back: Q&A with Filmmaker Kevin Miller, Part 1

A provocative new documentary on hell by Christian filmmaker Kevin Miller blazes into several big-city theaters across the country this week. Aptly titled Hellbound?, the film features interviews with an eclectic group of authors, theologians, pastors, musicians, and social commentators on the existence of hell and who, if anyone, goes there. Set in the context of 9/11, Hellbound? engages the traditional Christian understanding of hell but then goes on to explore the controversial concept of Christian universalism, or the idea that no one lands in hell for eternity.

In doing so, Hellbound? throws the gates of hell wide-open, so to speak, for a contemporary re-casting of the Christian concept of the fiery underworld of eternal torment most of us grew up with. It's a tour de force of a movie that grabs you from the very first interview with Margie and Jonathan Phelps from Westboro Baptist Church right up until the final words of quiet conviction from theologian Robin Parry of The Evangelical Universalist. With those two as bookends to the compelling theological discussion inside, Hellbound? is sure to ignite a firestorm of criticism, outrage, relief, and kudos from around the Christian landscape.

We caught up with Miller at the beginning of his nationwide tour to find out why he chose to make a film about hell, what was most challenging about this project, and his ultimate hopes for the film. Part 1 of our interview follows; we'll post Part 2 tomorrow. 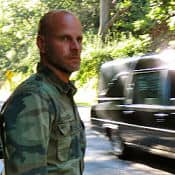 What inspired (possessed?) you to make a documentary about hell?

I've struggled with the concept of hell ever since I first became a Christian at Bible camp when I was 9 years old. My clearest memory from that summer is looking at my family out in the garden one beautiful evening and being hit with the sinking realization that if they didn't pray the "sinner's prayer" like I had, they would go to hell. It was doubly awful, because I knew they secretly ridiculed our evangelical neighbors, so there was no way I was going to admit I was now one of them. So I kept silent and did the only thing I could: I prayed for their salvation.

Richard Dawkins says teaching kids about religion is a form of spiritual terrorism. In some cases, I have to agree with him. The thing is, I don't believe my camp counselor meant to terrorize me. Exactly the opposite! I don't even recall him talking about hell, but I certainly got the message. It's like a virus of fear slipped in with the Good News and eventually threatened to overwhelm the host, because even though I didn't think about hell that much growing up, the fear was always there. Was I good enough? Had I prayed enough? Was I really a Christian, or did I have a false conversion? If I was a Christian, why was I constantly sinning? Had I unwittingly committed the "unpardonable sin"? And if God loved me, why was hell even an option? Something right at the core of Christianity didn't make sense, but like most evangelicals, I didn't realize there was another way to look at things. I figured rejecting the "hell story" meant rejecting Christianity, so I hung on as best I could and tried to make things work.

The problem is, if there's no safe place to process these thoughts, you end up pushing them down until you either explode or walk away from Christianity altogether. I exploded. After years of trying to tamp things down—going to Bible college, serving as a youth pastor, and going on missions—I finally said to hell with it all and gave in to every temptation I'd kept myself from (or at least been a little bit more circumspect about indulging). If I was hell-bound, then so be it.

That decision was followed by several years of misery and internal torment as I floated between worlds. I wasn't ready to renounce my belief in God, but I didn't see how I could measure up to God's standards either. I just didn't see any way out of my situation, and I had no one to guide me.

That began to change during a reunion with some old Bible college friends in the summer of 1995. I felt like the prodigal son coming home. Here they were all keeping the faith, and I was a mess. Then during a church service that weekend, something remarkable happened. The pastor's message was pretty simple. At one point he just started repeating the phrase "God loves you. God loves you," and I felt like he was speaking directly to me. I don't cry typically. But that Sunday I just fell apart. You can interpret that experience any way you want, but if I can look back to one moment in my life that might fall under the category of "supernatural" intervention, that would be it. Because everything was different afterward. No more holding back or trying to hide the way I was living. I had truly come to the end of myself, but I sensed God was okay with that, that God had been waiting a long time for me to come to that realization, and now we were finally ready to begin walking forward together.