To Hell and Back: Q&A with Filmmaker Kevin Miller, Part 2

Hellbound?, a provocative new documentary on hell, opens in theatres across the country this week. On the eve of the New York City premiere, we talked with Christian filmmaker Kevin Miller about why he wanted to make a movie about hell, and what kind of discussion he hopes the film inspires. Part 2 of our interview follows. Read Part 1 here.

Hellbound? presents a theological mash-up on the underworld, featuring a line-up of prominent religious leaders and scholars, from the ultra-conservative Mark Driscoll to Brian McLaren, whom some would see as quite liberal. What were you hoping to show by inviting such a variety of opinions on this central Christian belief? And what can we learn from this diversity within the Christian tradition?

On one level, I simply want to expose viewers to the vast diversity of opinion that exists within Christianity; and let me be the first to say the views presented within our film are far from comprehensive, but at least they offer a starting point for further investigation.

I also want to speak to fear-driven Christians as I was for so many years, those who don't even realize they have an option to the dominant view. I want to lay down tracks for those people who aren't comfortable with the traditional doctrine of hell but who aren't willing to throw out Christianity altogether. Or perhaps I should say, we are pulling the tumbleweeds off the tracks, because the tracks have always been there. It's just that a lot of us have forgotten about them.

On another level, I want to challenge people's sense of certainty by introducing them to intelligent, educated, well-meaning people who have come to vastly different conclusions on this issue. We're too quick to write off people who disagree with us by questioning their motives. I want to remind people of the subjective nature of human experience. As Universalist philosopher Thomas Talbott says, "We don't read the Bible as it is, we read the Bible as we are." There is no such thing as a "plain reading" of the Bible -- or any text. We all bring something to the table -- gender, race, psychological disposition, family of origin, economic status, you name it. I don't think it's a problem to have a bias. In fact, it's impossible not to have one. The question is, are we aware of our bias, and are we able to defend it? Having discussed this issue with literally thousands of people over the last couple of years, I find helping people get to this simple realization requires a monumental effort. So I'm hoping Hellbound? can help with that.

As for what we can learn from this diversity, I'm hoping that exposing people to a wide range of opinions will inject a bit of humility into our theological conversations. Right now our theological discussions seem to mirror our political discourse. I see increasing polarization where we come to believe the people who disagree with us aren't just wrong, they're evil. To me, this way of thinking is ultimately dangerous. As Frank Schaeffer says, no one ever ran into an abortion clinic with a bomb strapped to them saying, "I could be wrong!"

So I'm really hoping the film can lower the temperature and get people excited about discussing these issues instead of seeing competing ideas as such a threat.

Your film ultimately makes a very compelling case for Christian universalism and yet, within the evangelical and even mainline church, this is still a very controversial claim. When popular mega-pastor Rob Bell published his book Love Wins last year -- suggesting that God might not send anyone to hell -- he was quickly denounced as a heretic by the larger Evangelical community. Pastors have been fired for questioning hell. So, who is this movie for? Do you expect to change people's minds, and if so, to what consequence?

First off, I don't believe the film ultimately lands on Christian universalism as the only authentic Christianposition. I think the best you can say is that we argue there is plenty of room for Universalists within the Christian fold -- just as we made room for Annihilationists a couple of decades ago. People are so quick to forget that sort of thing. When people like John Stott and Clark Pinnock came out as Annihilationists in the late 1980s, it was a huge controversy. Today, even a hardcore conservative like Mark Driscoll will accept Annihilationists as wrong just not dangerously wrong. So that's progress! Twenty years from now, I expect we'll be saying the same thing about Christian Universalists -- especially those who retain a belief in hell, even though they don't think hell will last forever.

In terms of audience, I would say my primary audience is thoughtful Christians who are open to reexamining their faith. My hope is that the film will encourage them to take a second look at what they believe about hell, why they believe it, and how their beliefs are affecting the world. This is not an abstract theological discussion. What we believe about these things determines the type of civilization we create. We all imitate the God we believe in. And if we believe in a God who ultimately deals with his enemies through violence, even violent exclusion, we will deal with our enemies in the same way. I think history and current events attest rather clearly to this fact.

The Valley of the Kings, Deir al-Bahri, and the Two Colossi
Dan Peterson
3 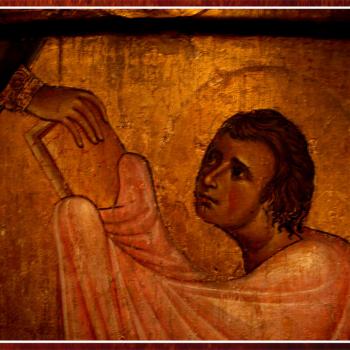 To Be Called Gods
Henry Karlson
4