Last week, with our brief look at the prophet Habakkuk, we began a foray into some of the work of the most minor of the Minor Prophets. We remember that the term "minor" merely refers to the length of the work, not to its importance. After all, Amos, Hosea, and Micah are termed "minor prophets, and no one would dare call their oracles less than powerfully significant. Yet, Habakkuk, and now Haggai, are little read or used in our preaching and teaching. In my own teaching of the Hebrew Bible, these two books usually received short shrift, if they received any shrift at all! Still, there is much to be gained by reflecting on these works, as I hope today's comments will indicate.

First, the name of the prophet deserves a look. Unlike the name Habakkuk, which appears to have no connection to Hebrew, Haggai comes from the word "festival," more specifically a pilgrimage feast. It is analogous to the Arabic hajj, that yearly pilgrimage to Mecca commanded for every able-bodied Muslim to make at least once in their lives. Hence, Haggai's very name suggests that his primary interests will be in worship, liturgy, and proper sacrifice in the temple of Jerusalem. Indeed, he quickly announces that the reasons for the Israelite struggles for survival in the "new" Jerusalem, the holy city regained after the end of the Babylonian exile, are the refusal of the returnees, as well as those who remained in the land, to pay careful attention to the fallen temple, spending the bulk of their time building and furnishing their own houses. "You have looked for much, but look! It came to little. When you brought it home, I blew it away. Why, says YHWH of the Armies? Because my house lies in ruins, while all of you hurry off to your own houses" (Hag. 1:9). For Haggai, the key to Israelite success in the difficult circumstances of a blasted Jerusalem is full attention to the rebuilding of the temple that was destroyed by Nebuchadnezzar in 587/586 B.C.E.

Fortunately for us later readers of this tiny book, we are given very precise dates with which we may comprehend the historical context of Haggai's concern. According to Haggai 1:1, his prophetic activity begins in September of 520 B.C.E, the second year of the reign of King Darius I of Persia. (Full disclosure: my only son's name is Darius, so I have a vested interest in the history of the Persian empire.) Thus, Haggai speaks exactly sixty-six years after the fall of Jerusalem. Much has happened in the interim. Most especially in 539 B.C.E. the Babylonian empire has been usurped by the Persians, led by the extraordinary King Cyrus. In effect, Cyrus entered Babylon, becoming its overlord without firing a shot, or at least very few shots. The last king of Babylon, Nabonidus, was apparently a far better librarian than he was a king, and Babylon tottered under his lax leadership and was ripe for the plucking.

Cyrus' ruling practices were far different from those of the Babylonians. Instead of dragging defeated rulers and their courts off to the capital city, Cyrus rather allowed all former captives to return home and even paid for their journeys, apparently providing extra cash for any plans they might have upon their return. Little wonder that the exilic prophet, II-Isaiah, refers to Cyrus as YHWH's Messiah (Is. 45:1)! Still, the exiles' return was less than glorious. They found a wrecked city, a shattered economy, and many who had not gone with them to Babylon, but instead had remained in the land, eking out a subsistence living as best they could. These people had no time and little interest in rebuilding the temple, but were far too busy merely living. One can only imagine what many of them thought when Haggai began to accuse them of selfishness and greed with respect to the temple of YHWH. They no doubt retorted, "Easy enough for you to say! You have not attempted to live in a blasted and chaotic land for the past three generations! Take your temple talk elsewhere!"

But Haggai had Persian internal turmoil on his side, or at least he thought he did. After the death of Cyrus in 529, Cambyses became king; his policies were not as generous and lenient as those of his predecessor. For the seven years of his reign, he tightened the screws of the empire, and tiny Israel no doubt feared the lash of his hand. At his death in 522, the Persian throne was in turmoil until Darius I consolidated power and ensured the survival of the empire in 520. Perhaps in these years of Persian confusion, the vassal states imagined that they might experience some bursts of freedom and independence. It was precisely then that Haggai urged his fellow Israelites to rebuild the Temple, thus paying appropriate homage to YHWH, and thus ensuring, according to Haggai, the return to the ancient glories of Israel. However, with the consolidation of Darius' authority, any hope for genuine freedom from Persian mastery was dashed. The attempt to put Zerubbabel ("seed of Babylon"), a direct descendant of the great David, on the throne was thwarted by the now stable power of Darius, though we have no direct evidence of how that attempt was made impossible.

Can One Be an Evangelical and Roman Catholic?
Roger E. Olson
2 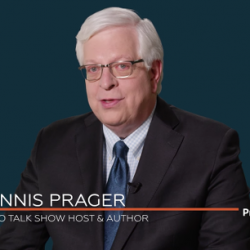 PragerU Propaganda Could Be Coming to a Classroom Near You
Val Wilde
Get Patheos Newsletters
Get the latest from Patheos by signing up for our newsletters. Try our 3 most popular, or select from our huge collection of unique and thought-provoking newsletters.
From time to time you will also receive Special Offers from our partners that help us make this content free for you. You can opt out of these offers at any time.
see our full list of newsletters
Editor's picks See all columnists