Living Forever or Worshipping Your Whole Life? Reflections on Psalm 23

The final verse brings the sharpest differences between my reading and those more traditional. I will translate it first.

Certainly, unbreakable goodness will pursue me my whole life,
and I will return to YHWH's house as long as I live.

In the first line of verse 6 the poet proclaims that the wonderful chesed of YHWH, emphasized in hendiadys (that is, two nouns joined to allow one to reinforce the other) by the simple word tov, "good," will "pursue" (the word frequently has this meaning rather than "follow") the poet as long as she is alive. And her promise in response to that lifelong pursuit by YHWH is "to return" (the verb form is identical to a form that has been traditionally read as "dwell" or "sit") to "YHWH's house (that is, the temple) as long as she lives. That final construction, l'orek yamim, (literally perhaps "a length of days") plainly does not mean "forever." The reason why the KJV translated it forever has no rational grammatical explanation. I note that the NRSV does not even offer the "translation" "forever" in its extensive footnotes on this psalm. In the main body of the text NRSV reads "my whole life long," while the footnote offers a possible alternative "Heb. for length of days."

I was chastised with no little bitterness and anger when I suggested to my colleagues on the main committee of the new hymnal that Psalm 23 said nothing of living forever, one member even saying he would vote the entire hymnal down if we put such a reading in the book. So, in good churchly fashion, we compromised. In the Psalms themselves one will find no talk of forever in our translation, while those who still want the KJV are directed to another place in the hymnal itself. I doubt anyone will ever dislodge from the common memory the KJV of this psalm.

So, what to do, if anything? My reading of the poem is grammatically sound, far more likely than the KJV, even of the NRSV. Is that fact enough to help anyone think differently about the psalm? I doubt it. After all, I am only one more egg-headed theological liberal, ever out to correct the confusion of the masses about things biblical. The KJV says "forever," and "forever" it will probably be, well, forever. The KJV has plainly overridden any possible attempt to demonstrate its error, however much it may be shown to be an error. Facts are not the only constituent of faith and practice. That has always been true, and will always be true. Still, I felt it important to offer this to you; do with it what you will. I sincerely doubt, however, that your next funeral will avoid the KJV version of Psalm 23. I get it, however much I think silently to myself that we are all saying something that is just not in the psalm we are reciting. It will hardly be the first or only time in my religious life that I have said something in church that I know full well is not quite "correct" in the strict sense. But when I speak the 23rd Psalm at a funeral, I hope and believe that the deceased is in fact in some mysterious way with God even as I am speaking. Whether or not Psalm 23 says that or not is perhaps beside that crucial point of my belief.

Christian Nationalism and the Struggle for LGBTQ Equality: Who is my Neighbor?
Jennifer Butler
3 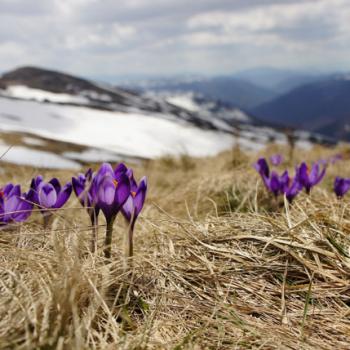 Jesus Turns Our Crosses into Crowns: An Update from Joni Eareckson Tada after...
Randy Alcorn
4

Three Tasty Thoughts Found in ‘The Truffle Hunters’
Paul Asay
Get Patheos Newsletters
Get the latest from Patheos by signing up for our newsletters. Try our 3 most popular, or select from our huge collection of unique and thought-provoking newsletters.
From time to time you will also receive Special Offers from our partners that help us make this content free for you. You can opt out of these offers at any time.
see our full list of newsletters
Editor's picks See all columnists