Lord, I Want to Be Sheep in My Heart! Reflections on Psalm 23

The fourth Sunday in the Easter season brings us to the most well-known piece of Scripture in the entire canon, and thereby the most beloved — the 23rd Psalm. I am always astounded at funerals that nearly everyone there can recite the poem, from memory, in the King James Version, flawlessly. This includes those in the crowd, often the majority, who have not darkened a church door in decades. There is just something about this psalm that stays with the hearer long after it has first been heard. The reasons for this fact are beyond me, though I imagine that its near ubiquitous use in funerals may have a good deal to do with it.

There is much to be said about this famous poem, but in this brief article I wish to focus on two points only, both of which, I think, are keys to what this ancient poet was attempting to say. Yes, this poem is described in the superscription as "a psalm of David," but as I have said in these reflections more than once, the Hebrew may also be translated "a psalm to David," implying that it was dedicated to the infamous sweet singer of Israel, rather than having been composed by him. It seems reasonable to suppose that David wrote a psalm or two, given his fame as harpist and singer, but according to the lengthy story about him in the books of Samuel, he was far too busy with other matters — like adultery and murder — to have spent many of his days composing poetry. Hence, I imagine that the editor who wrote this superscription for the poem was thinking of David as the patron saint of music as he sang.

The opening line is famous and important. "YHWH is my shepherd; I lack nothing." The controlling metaphor of the poem is that YHWH is shepherd and I am sheep. That appears innocent and clear enough to allow us to float into a romantic haze, filled with lush grass, quiet waters, and pastoral calm. I imagine that the funeral participants may make that move as the psalm is spoken in the midst of the reality of death. But as we do float serenely in the quiet sanctuary, we inevitably forget one thing: if I am sheep, then I am dumb as a box of rocks! In the land of Israel, everyone knew about sheep, since they were everywhere on the hillsides and in the streams of the land. And what they knew beyond all doubt that it was not a very nice thing to be likened to a sheep.

Sheep need constant watching, as they stick their ever-hungry snouts into the grass below them or into the hinder parts of the sheep in front of them, and wander without a thought up and down the land, eating and defecating and straying up dangerous hillsides, and down into rushing waters, foolishly risking fleece and mutton again and again to the utter frustration and consternation of the shepherd, who must be constantly vigilant lest another of her charges drown or fall or be snatched away by the lurking predators of the forest and vale. Shepherding is no pleasant walk in the dog park; it is hard, dusty, smelly, constant labor, and if I am sheep, I am lost without a shepherd.

Thus, when I intone blithely, "YHWH is my shepherd," I have announced that I am desperate for one who can keep me off the shoals of disaster, out of the jaws of horror, away from the dangers that life presents — disasters and horrors and dangers that I simply cannot survive on my own. I am sheep, and therefore always prone to ridiculous and continual behaviors that demand a shepherd to keep me in line, to whack me on my buttocks, to lead me to the grass and the waters that give life and away from the dark valleys of doom. Left to my own senseless devices, I will drown or fall or be devoured. I need a shepherd, and YHWH says that YHWH will fill that bill. I doubt many of the worshippers in funerals imagine that as they mutter the 23rd Psalm, they are saying that they are fools and that they hope that YHWH really is their shepherd. At least, I fail to see many faces that sense those realities.

In fact, I imagine that they have come to celebrate and mourn the life of their friend or co-worker or cousin of a friend most especially by saying, rather more loudly than the rest of the poem, the final line. "I will dwell in the house of the Lord forever." It is a funeral, after all, and in the traditions of Christianity as we confront the power of death, we proclaim that death does not have the final word for us. No, we hope to dwell in the house of the Lord forever.

Unfortunately, that is precisely what Psalm 23 does not say! I know this comes a shock to those of us who have regularly gone to funerals, or conducted them, always saying this psalm, trusting that its final word of comfort will spread over the gathered ones a sense of calm and hope. However, what the Hebrew text says at 23:6 is "I shall dwell in the house of YHWH my whole life long" (NRSV). Even the footnote in the NRSV says nothing about eternity: "Hebrew 'for length of days,'" it reads. And it is quite right. I would translate the line somewhat differently even than that: "I will live (or "return") in (to) the house of YHWH as long as I live." What the poet appears to promise is that she will continue to worship in the great temple, returning there again and again as long as she lives. It is there, finally, in the temple that she will find the shepherd YHWH, to whom she may bring her praise and thanksgiving for leading and guiding her throughout her life. 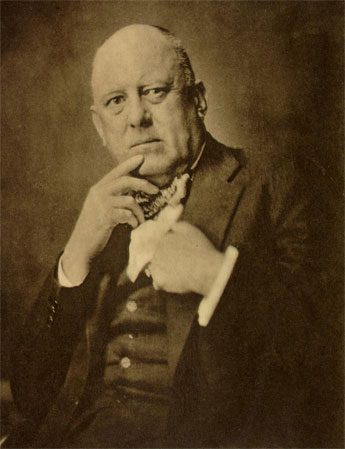 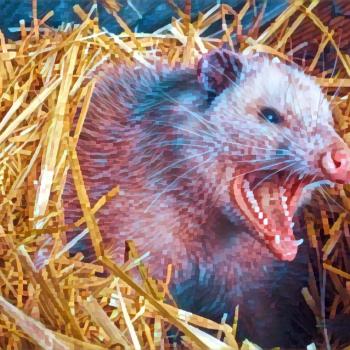 Opossum at the Disco
Thumper Forge
3