How easy it is for us to fall asleep (one hopes not literally, but surely metaphorically) as we exit the stirring narrative of the plagues of Egypt (Ex. 5–11) and enter the world of right sacrifice in all its seemingly boring detail. Exodus 12–13:16 stands as a sort of sore thumb, thrusting its ritual head through the narrative thicket and bringing the rip-roaring tale to a screeching halt. Exodus 13:17 thankfully brings us back to the story, as the escapees from Egypt are about to face their most terrifying trial, the great Sea of Reeds against which they are trapped with Egyptian chariots thundering behind them. One might not be sorry if this Passover ritual stuff just disappeared, and the text moved straight from Exodus 11:10 to 13:17.

But the loss would be far greater than we imagine, for without these verses it is very likely that the crucial story might have drowned in the sea of time just as Pharaoh and his horsemen, according to the story, did. After all, without a regular celebration of the ritual, the story's shelf life is quite short. And also the ritual has rather more theological juice in it that first meets the eye.

Narrative needs ritual regularity if it is to have ongoing relevance for those who embrace that narrative. Who better than we Christians know that? Our regular celebration of the Eucharist is, of course, a clear reminder of the story of Jesus, his life, his death, his resurrection. Those traditions that perform that celebration at least weekly, in my mind, get far closer to the reason for the ritual in the first place.

In my wife's last congregation before her retirement from the United Methodist pastoral ministry, that church had communion (Eucharist) every Sunday. The reasons for this weekly event (weekly communion is not common in UM churches) had to do with the vast diversity of this particular congregation. Many first languages were represented, and it occurred to a previous pastor some years before my wife became pastor that the ritual of communion was one involving far more than words and could thus be a uniting event across many languages and cultures. He was quite right, and that church now would not dream of not doing communion at every Sunday service. Drinking and eating and sharing together regularly bind that community with bands of devotion and love, forged in the fires of Jesus' offering for all.

And so it is in Exodus 12. The editor of the book of Exodus stops his famous narrative right in its tracks and announces that it is time to celebrate the story in regularized ritual. Fifty-three verses later, we all know how to celebrate the Passover feast. And we know why we are bidden to do it; we who count ourselves as heirs of the first Passover are reminded by the ritual's details what is finally at stake for us who claim the story that the ritual enshrines. The details are important, because they point us to the story in ways that the story itself cannot do, however exciting and central that story is.

Passover is to be performed in the first month of the year (Abib, as the Hebrew calendar has it—see Dt. 16:1), because that is the time when YHWH brought Israel from the land of Egypt, out of the house of their slavery (see also Dt. 5:6). The appropriate day is the tenth of Abib (Ex. 12:3). On that day each family, each household, is to take a lamb. But note that lambs are to be apportioned according to the size of the family; if a family (a single person?) is too small for a whole lamb, then that smaller unit must divide the lamb with other small units, according to "the number of people who eat of it" (Ex. 12:4). This demand assures that no family has more than it needs for the celebration, and that every family will have some lamb portion with which to celebrate.

What a lovely way to ensure all have enough and no one has more than their share. At the very heart of Passover is the desire to include all in the ritual and to make certain that all have enough, but none have too much. Our Christian communion rituals reflect this ancient demand, since all without fail have enough and none have more than they need. Immediately, one can see that this sort of sharing is intended to be a model for the larger society, a society that too often presents some with far more than they need and many with far less. Our 21st-century society is just like that, unfortunately and to our shame. Two billion of our fellow humans attempt to live on perhaps two dollars per day, while the eighty-five richest human beings on the earth control more resources than all of those two billion! (This is a statistic I continue to find completely unfathomable.) Passover has its heart a call to equality.

The lamb, whether sheep or goat, is to be without blemish, reflecting the pure life that all who participate are called to live (Ex. 12:5). The ritual slaughter of the lamb is delayed until the fourteenth day of the month and is to be done at twilight, as a memory of the nighttime escape of Israel from Egypt. From the blood of the lamb, each celebrant is to smear blood on the two doorposts and the lintel of the house where the ritual is being celebrated. Of course, this part of the ritual is clearly a much later adaptation, since doorposts and lintels are hardly available in the desert! In a modern Jewish house, one still finds a "mezuzah" (Hebrew for "doorpost"), an artistic brass plate containing usually the words of Deuteronomy 6:4-9, as a substitution for the blood of the sacrifice. (I happen to have one on the front doorpost of my house of now thirty years as a reminder of my engagement in the ancient Jewish Passover to which I, as a Christian, am still a certain sort of heir.)

After the War
Mark Nepo
2 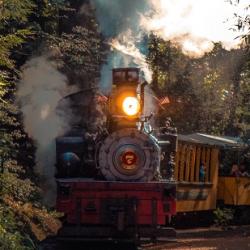 Todd Bentley: What a Friend He Has--er, HAD in Rick Joyner!
Cassidy McGillicuddy
3

Kenosha Killer Kyle Rittenhouse Parties With Proud Boys While Out On Bond
Michael Stone
Get Patheos Newsletters
Get the latest from Patheos by signing up for our newsletters. Try our 3 most popular, or select from our huge collection of unique and thought-provoking newsletters.
From time to time you will also receive Special Offers from our partners that help us make this content free for you. You can opt out of these offers at any time.
see our full list of newsletters
Editor's picks See all columnists