"The Prodigal" and Brennan Manning: An Interview with Greg Garrett

Until I met Dr. Greg Garrett at Baylor University, I thought a schism existed between the Christian and secular writing worlds. I put my faith on one shelf and my writing on the other, hoping to grow in both realms, but hesitant to try to fuse Christianity and fiction. When I took Garrett's American Literature class, he rarely mentioned his writing career, although he sometimes alluded to the fact that he'd written a few books. It wasn't until he became my thesis mentor and I sat down in his office that I discovered Garrett's substantial presence as a Christian literary artist, and learned how he had himself been trying to bridge that gap between sacred and secular in his work.

Greg Garrett has published several critically-acclaimed novels, including the Pulitzer Prize nominee Free Bird, Cycling, and Shame, as well as a dozen nonfiction books at the intersection of faith and culture, including The Other Jesus, Faithful Citizenship, and We Get to Carry Each Other: The Gospel according to U2. Garrett's latest novel is The Prodigal, a collaboration with the late Brennan Manning. These two authors created a beautiful story of love and forgiveness that confirms that there is no schism between the Christian and secular writing worlds. Acclaimed by critics already, The Prodigal is simultaneously a work of literary art—and faithful service.

How did you meet co-author Brennan Manning? Were you a fan of his work before you worked together on The Prodigal?

Although I regret it, I never met Brennan face to face. There was a lot of distance between us: he lived in New Jersey, and as you know, when I'm not traveling to speak and teach, I live in Austin. Our agents at Alive Communications were our matchmakers and go-betweens through the process. Brennan's agent knew that he was coming to the end of his life, and that he had one publishing goal still unfulfilled—to leave behind a novel that illustrated his great themes of love, grace, and forgiveness. He also knew that because of Brennan's deteriorating health, he'd need a partner to help him tell that story. Andrea Heinecke, my agent, pitched my body of work as a fiction writer interested in love, grace, and forgiveness and not afraid to take on hard topics, and at last, everyone agreed we should work together.

I was not a Manning devotee, but I loved The Ragamuffin Gospel, which seemed to me to capture those things I was trying to convey in my own theological writing. That was probably a good thing; if I'd idolized Brennan instead of just admiring him, it would have been hard to push for the things I thought needed to be in the story. So it was a match made, well, if not in Heaven, at least in Colorado, where Alive Communications is based.

This was Manning's last book. What was your experience of working with him like?

After I was paired with Brennan, our first job was to find a story that we thought would accomplish all our aims for the work. As I said, he wanted to leave behind a last book that people could read and remember his life's work by. I wanted to be respectful of that great body of work, and at the same time to write a novel I could be proud of as a literary artist.

It was clear early on that we ought to retell the Parable of the Prodigal Son, Brennan's favorite story. We agreed on a central character, Jack Chisholm, who would be our focal character, and we agreed that his fall from grace—and his recovery and change for the better—would be our topic. After we'd agreed on the story and central characters, it became my task to flesh out those characters and bring them to life on the page. I think this is a good analogy: Brennan and I designed a house together. Then I had to build it and decorate it with his stuff. People who have read my first three novels will see how very different that process makes The Prodigal—and yet how many themes from my earlier work reappear in this book.

You speak of Manning's thoughts of grace in your Patheos article about his death. How did his personal experience with grace, as well as your experience of it, drive this book? 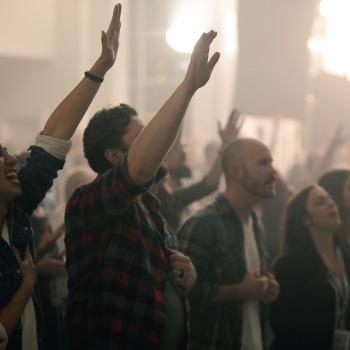 The Work of the Holy Spirit or the Work of the Kick Drum?
Jonathan Aigner
Get Patheos Newsletters
Get the latest from Patheos by signing up for our newsletters. Try our 3 most popular, or select from our huge collection of unique and thought-provoking newsletters.
From time to time you will also receive Special Offers from our partners that help us make this content free for you. You can opt out of these offers at any time.
see our full list of newsletters
Editor's picks See all columnists