But the less than humble one cannot stop his prayer yet. "Because you, YHWH of the armies, God of Israel, have opened the ear of your servant, saying 'I will build you a house,' I, your servant, have found the heart to pray this prayer to you" (2 Sam. 7:27). For the third time in the prayer David has reminded YHWH of the promise made of an eternal house, as if YHWH might tend to forget such things unless prompted by his servant, David. And still the prayer drones on!

"And now, YHWH God, you only are God, and your words are true, and you have spoken to your servant this good thing" (still a fourth reminder!). "Now, be so good as to bless the house of your servant so that it may continue in your presence forever" (2 Sam. 7: 29a). With the final request for YHWH's blessing, one could hope the prayer would end. But, not quite! "For you, Lord YHWH, have spoken, and with your blessing may the house of your servant be blessed forever" (2 Sam. 7:29b)! At last, David's very long-winded prayer comes to its arrogant close. Over and again, in the light of Nathan's announcement that YHWH will not allow David to build a physical house for YHWH (2 Sam. 7:4-7), but instead YHWH will make David's house an eternal one (2 Sam. 7: 9-12), David demands from YHWH at least five times the absolute certainty that what YHWH has said YHWH will do, namely make David great and his progeny eternal.

It has long been said that the dulling repetition of this prayer is the direct result of the Deuteronomic historian whose prose style, I grant, is less than scintillating.

I suppose one could easily conclude that. But in the light of the man David, the oily, clever trickster, who stops at nothing to become king and remain king, I wonder if this long prayer is more of the same self-aggrandizing, self-serving sort of palaver we have come to expect from David.

Would he be the last person of prayer who instead of honoring and praising God in prayer in fact demands from that God all the desires of his/her heart, holding God's holy feet to the fire of the divine promises, urging, cajoling, weaseling from that God all the stuff that can be contrived in the twisted corridors of the human mind? I think not! 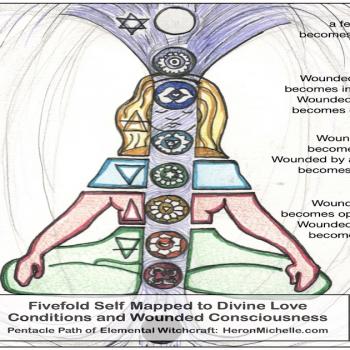 The Mt. Bethel UMC Problem
C. Don Jones
Get Patheos Newsletters
Get the latest from Patheos by signing up for our newsletters. Try our 3 most popular, or select from our huge collection of unique and thought-provoking newsletters.
From time to time you will also receive Special Offers from our partners that help us make this content free for you. You can opt out of these offers at any time.
see our full list of newsletters
Editor's picks See all columnists