Today we receive one of the Bible's greatest and most enduring messages concerning the proper way the text itself is to be approached in worship and applied in our lives. It is a pity that this text is so poorly known, tucked away as it is in the little-read book of Nehemiah. Scholars have argued long and contentiously, as scholars are wont to do, about the historical context of the work of the figures Ezra and Nehemiah. In this passage Ezra is called both "scribe" and "priest," while Nehemiah is named "governor." Well, those titles are well enough known, but exactly what they mean in this particular historical time is not quite as easy to discern.

And the historical time itself is much in dispute. Given evidence from the remainder of the material of the books Ezra and Nehemiah, it appears that these two apparently Persian officials may not have operated at the same time at all; one may have preceded the other by as much as fifty years. And exactly which one was first is also the subject of debate! As you can see, to discover a precise historical context for this wonderful and important scene is finally impossible. I would urge us to look at the scene as it is given to us in the text, imagine that we are in 5th-century B.C.E. Jerusalem, and evaluate what is being told to us, not worrying so much about exact history.

What does 5th-century B.C.E. Jerusalem look like? Again, we have scant historical information here, but it is fair to say that the place is a long way from its glory days prior to its destruction some 100 years before. A temple of some sort has been rebuilt by returning exiles in 515 B.C.E., but the prophet Haggai mocks the temple as a poor model of the glorious Solomonic temple that preceded it (see Hag. 2:3). Perhaps we can imagine the scene into which Ezra stands to read Torah to the assembled population. The streets are still pockmarked with rubble that has yet to be cleared from the Babylonian onslaughts and various assaults from lesser and unknown peoples over the years since. The temple stands, but it appears a pale shadow of the memory of the great temple of the past, its columns substandard, its courts a shambles, its altars filthy and foul-smelling from too many beasts and too few cleaners.

It is here that Ezra, first called scribe (that is, learned lawyer in the Torah of YHWH), stands on a "wooden platform made for the purpose" (Neh. 8:4) to read from "the Torah of Moses, which YHWH had given to Israel" (Neh. 8:1). I can see a raised dais of used lumber, strapped together with camel ropes, shaking a bit as Ezra climbs to read. And just what is he reading? The Torah of Moses, we are told, but exactly what that is cannot finally be ascertained. It seems unlikely that it is the five books of Moses that we know today, since Leviticus was perhaps still in the process of final codification in the 5th century. Surely, this Torah would have included the great stories of the past, the sagas of the patriarchs and matriarchs, the magnificent tales of Egypt, the defeat of the mighty pharaoh and the victory at the Sea of Reeds. For Torah does not only mean law; it means all those things—prophecies, psalms, stories, legal traditions—that make up the vast panoply of Israelite culture and history. Perhaps Ezra read some of that to the assembly that day. After all, he read "from morning until midday," so he had a lot to read!

But to whom was he reading? He read "before the assembly, both men and women and all who could hear with understanding" (Neh. 8:2). Presumably, the assembled people were those of the community who had the ability to understand what was being read. This has led some to believe that this is a question of linguistic ability. If Ezra is reading the Torah of Moses, written in Hebrew, to people whose language was by this time most probably Aramaic, the common language of the cultured Middle East in those days, the crowd must have been at least bilingual to be able to understand the reading. Perhaps. But of course "understanding" can also mean "grasp the meaning" or "interpret the words." It might plausibly be surmised that both meanings of "understanding" are intended. However we are to understand this reality, Ezra proceeds to read the Torah to the community.

The details of the scene are fascinating. When Ezra opens the book (perhaps "scroll" is a better way to think of it), "all the people stood up" (Neh. 8:5). From this detail two modern-day liturgical practices derive. When the Torah scroll is removed from the Tabernacle in contemporary Jewish temples or synagogues, it is customary for the congregation to stand up. And in many Christian churches, when the Gospel text is read, it is customary for the congregation to stand up. (I admit to being somewhat troubled by this practice; if all Scripture is from God and is equally significant for our faith and practice, perhaps we ought stand for all Bible readings.) 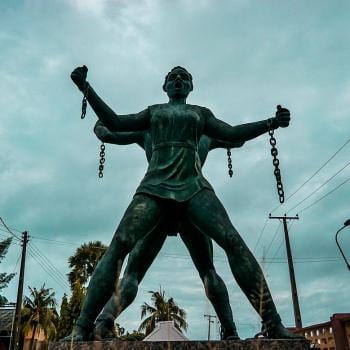 Rich Mullins Died 23 Years Ago Today: Here's My Tribute
Tim Suttle
Get Patheos Newsletters
Get the latest from Patheos by signing up for our newsletters. Try our 3 most popular, or select from our huge collection of unique and thought-provoking newsletters.
From time to time you will also receive Special Offers from our partners that help us make this content free for you. You can opt out of these offers at any time.
see our full list of newsletters
Editor's picks See all columnists