The lectionary choice for today from the book of Hosea expresses a modern, and perhaps even ancient, problem that many have with the central metaphor of this 8th century B.C.E. northern prophet of Israel—namely his decision, directed by YHWH, to marry a prostitute. This sign act of the prophet is to announce to his people that they, like Gomer, his bride choice, have become prostitutes to YHWH, their God, forever running after other gods in a mad dash for power and success and thereby forsaking the only one who can give them what they truly need, the great YHWH alone.

Would a prophet actually pull such a stunt? Well, with Isaiah running naked through Jerusalem's streets and Ezekiel burying a used loincloth in the mud of a foreign river, one ought not expect mere normal behaviors from these wild-eyed men of God. Still, public nudity and muddy undergarments are one thing, but the use of a woman of the evening for an object lesson is quite something else. For those of us who are feminists—and I hope all you readers consider yourselves feminists, too—it is deeply offensive to use a woman as a metaphor for human idolatry. Such literary effects do nothing but demean women and hold men up for the crude and misogynist beasts that they too often are. Of course, Hosea is hardly alone in this abuse of women; he is joined by other prophets like Jeremiah and Ezekiel, who revert to the same foul imagery to score similar theological points.

So what is a preacher to do with this stuff? The great majority have breathed a deep sigh of relief, muttering gleefully, "After all, it's only the Old Testament; thank God there is always the Gospel," and have eyed the right side of the Bible with evident ease. But those of us who love the Hebrew Bible, warts and all, want to offer these great prophetic words to our people in such a way that we do not reinforce dark prejudices that existed 2800 years ago, and still find their painful echoes today. So?

It may be a comfort to know that the very earliest collectors of the prophecies of Hosea felt a similar discomfort, and they expressed that discomfort in two quite remarkable ways. In today's text they could not allow the hard words of Hosea's metaphor of Gomer to stand without challenge, as we will see. And in next week's text, the amazing chapter 11, they will challenge the very female metaphor itself and thus, at least in part, will redeem the cruel language that chapter one throws in our face. So, get ready to preach Hosea 11 next week, but let's have a closer look at Hosea 1 today and see what treasures we can turn up for this week.

At the direct command of YHWH, Hosea (his name is built from the verb "to possess" as the land of promise, or "to redeem"; see the name Jesus, yeshua from the same verb in Hebrew) chooses a known prostitute to marry and in quick succession she bears three children. Each of the children, two sons and a daughter, is given a dangerously symbolic and theological name. The first son is called "Jezreel," literally "God Sows." This name is at least doubly ironic. At the level of symbol, the act of sowing means the desire to create a new crop, to make a field productive in order that people may have food. But in this case the sowing of God will not be productive but destructive, for YHWH is in the punishing mood rather than the farming mood. Jezreel reminds God of the horrors of Jehu, that especially bloody general and king of Israel. And for his monstrous depredations in God's chosen land, God has decided to "punish the house of Jehu for the blood of Jezreel" (Hosea 1:4). It is useless to attempt to pinpoint the precise historical record that the prophet has in mind, but a good one would be Jehu's brutal murder of the Baalite Jezebel at Jezreel, when he ran over her fallen body with his war chariot (2 Kgs. 9:30). In any case, Jezreel is a place replete with war and blood. From Deborah's defeat of the armies of Sisera to Gideon's mockery of the Midianites to Saul's struggles against the Philistines to Josiah's ignominious death at the hands of the Egyptians, Jezreel, boundary between Galilee and Samaria, for hundreds of years has been the place of furious battle, and YHWH has apparently had the divine fill of it.

The second child, a daughter, is born to Hosea and Gomer, and she is to receive the appalling name of "Lo-ruhamah," or "not pitied," for YHWH in a terrifying threat claims, "I will no longer have pity on the house of Israel or forgive them" (Hos. 1:6). The word "pity," rechem in Hebrew is built from the noun "womb." In a classic place in the Hebrew Bible, Exodus 34:6," YHWH is revealed to Moses as "merciful and gracious." The first word is in fact a form of this word for womb, rechum. In short, it could be said that YHWH's love is womb-like, a deep connection such as that found between a woman and her unborn child. And here Hosea announces that YHWH's womb is no longer filled with pity for Israel. This chief attribute of the loving YHWH has been seemingly shut against Israel forever. 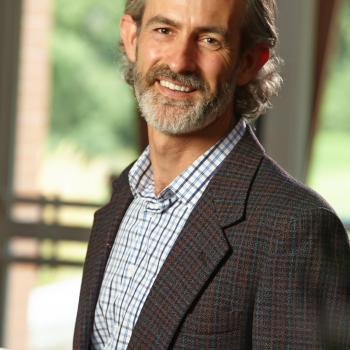 "Salvation and the Good Life": Julien C.H. Smith, Author of Paul and the Good...
Nijay Gupta
4

The New American Judaism, and Christianity
Philip Jenkins
Get Patheos Newsletters
Get the latest from Patheos by signing up for our newsletters. Try our 3 most popular, or select from our huge collection of unique and thought-provoking newsletters.
From time to time you will also receive Special Offers from our partners that help us make this content free for you. You can opt out of these offers at any time.
see our full list of newsletters
Editor's picks See all columnists