The lectionary collectors have done us a particularly poor turn this week by omitting crucial verses in the very center of this tale of the Ark of the Covenant. They have left verses 6-12a out of the story, but those verses give us crucial insight into the character of David and help us to understand further just what he thinks he is doing with the Ark of the Covenant of YHWH.

Last week we saw how David captured the city of Jerusalem from its Jebusite inhabitants, and quickly renamed the place the City of David. And just as quickly he hires carpenters and stonemasons, and buys some of the giant cedar trees of Lebanon with which to build a palace in his new capital city (2 Sam. 5:11). All of these skilled workers come from Tyre, a wealthy peninsula nation that has made its considerable fortune by providing architectural and building expertise to emerging peoples. During the construction of his palace, David expands his harem with concubines and wives (2 Sam. 5:13-14), and becomes thereby a budding potentate in the Middle East, if on a rather smaller scale than the huge empires that surround his own growing one.

Soon, the Philistines again attack Israel from the west, perhaps testing the new king and his forces, and David wins a string of significant victories over Israel's long-time foes (2 Sam. 5:17-25).

For reasons we are not told, David then finds it necessary to consolidate religious power in Jerusalem to match the political power he has gained there. He is reminded, or he remembers, the fabled Ark of the Covenant, created by Moses in the wilderness as a portable shrine for the moveable YHWH, ensconced in the Shiloh shrine from where it is captured by the Philistines, and then returned to Israel after its mysterious powers are manifest in several Philistine holy places. David takes a huge force of his warriors to a place called Baale-judah ("Baal of Judah"? Or "Master of Judah"?) where the Ark now rests. Second Samuel 6:2 gives us the Ark's full name: "the Ark of God, which is called by the name of YHWH of the armies who is enthroned on the cherubim." The cherubim are fearsome monsters, carved into the top of the Ark, with bat-like wings and sharpened talons, and somehow YHWH finds a divine throne there. Clearly, this ancient chest will serve David well as a hallowed symbol of the presence and power of YHWH, God of Israel. It will be an excellent feature with which to sanctify the new city of David.

The procession toward the city begins well enough. A new, heretofore unused, cart is built to carry the Ark, just as first happened decades ago when the Philistines returned the box to Israel (1 Sam. 6:7), wanting no part of its great power over their gods. Abinadab has been the keeper of the awesome chest, and sends his two sons, Uzzah and Ahio, to accompany the Ark to Jerusalem. The parade has been well planned. David and all the company were dancing before YHWH with all their strength, while others of the people were playing musical instruments: lyres, harps, tambourines, castanets, and cymbals undergirded the raucous songs. It was a party mood, and David was surely pleased with his choice of the Ark to seal his kingship even tighter to the people and to YHWH.

Then, disaster struck. Uzzah, who had been leading the Ark on the journey, reaches out his hand to prevent the Ark from falling off the cart, and instantaneously he is struck dead by the anger of YHWH. Apparently, the great power of the object is still intact, and it is in no way to serve any base human desire. Upon seeing the death of the faithful Uzzah, David is first furious with YHWH's fury against Uzzah, but then is afraid of YHWH, saying, "How can the Ark of YHWH come to me?" (2 Sam. 6:9). However one understands the magic of this grim scene, it is clear that David has been stopped cold in his attempt to use the Ark to his own advantage.

He immediately decides not to take the Ark to Jerusalem, but takes it instead to the house of Obed-edom, ("servant of edom"? or "red servant"?), a Philistine ally, where it remains for three months. After David is told that YHWH has apparently blessed Obed-edom and his household, David renews his intent to bring the Ark to his city. However, the planned parade now has different rules. "When those who carried the Ark of YHWH (has the cart been discarded?) had moved six paces, David sacrificed an ox and a fatling" (2 Sam. 6:13). This makes for a very slow trek to the city, if every six steps a major sacrifice is to be offered. It is as if David now takes the Ark's power and mystery much more seriously than first he did.

But the king has hardly discarded his plans for the Ark completely; he still sees it as an important symbol both of YHWH and also of his own power. Hence, he himself leads the procession up to the citadel of Jerusalem, "dancing before YHWH with his full strength, wearing (only) a priestly ephod" (2 Sam. 6:14). It is clear that this garment is in effect something like a glorified G-string, leaving little to the imagination about the lusty manhood of their king. And all are watching the cavorting monarch, especially his first, and now largely forgotten wife, Michal, daughter of Saul. She observes the leaping king, her husband, displaying himself before all and sundry, and "she detested him silently" (2 Sam. 6:16). 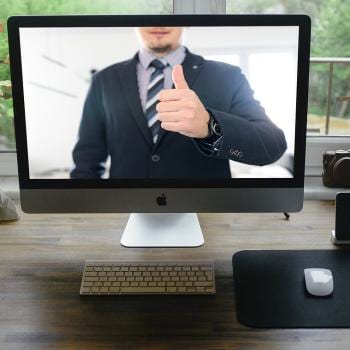 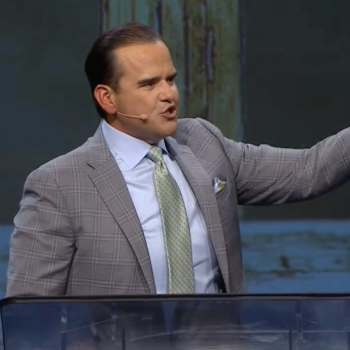 Eric Metaxas: Jesus Was White, Did HE Have 'White Privilege'?
Libby Anne
Get Patheos Newsletters
Get the latest from Patheos by signing up for our newsletters. Try our 3 most popular, or select from our huge collection of unique and thought-provoking newsletters.
From time to time you will also receive Special Offers from our partners that help us make this content free for you. You can opt out of these offers at any time.
see our full list of newsletters
Editor's picks See all columnists