Keeping Calm and Carrying On

We are young, white, male, evangelical in our faith, and conservative in our politics. On November 6, our kind experienced a series of catastrophes amounting to an extinction-level event. The Republican candidate for president lost, winnable seats in the Senate were lost, and marriage lost in the four states where it was on the ballot.

The oceans may yet be rising, but the tides of history have changed and the Rubicon crossed.

At least, that's what we keep hearing. Mere hours after the polls closed, the blogs and tweets came rolling in: Christian conservatism is dead. And now—finally—evangelicals will realize the futility of their culture warring (a lesson our fellow millennials learned long ago, in college). Unless evangelicalism rebrands itself in the light of these political and demographic trends, it too is doomed.

We think the truth has been lost by those prognosticating the demise of Christian conservatism. The postmortems telling of evangelical hand-wringing are overwrought or at least premature. We weren't downtrodden or despairing the election.

It turns out we don't put our faith in politics. Pundits, post-partisans, and journalists keep telling us we do, but we really don't. Sure, the election results were disappointing. The unborn will not have an advocate in this administration; the continuing erosion of the family will lead to increased pain, poverty, and social dysfunction; religious practice will be increasingly marginalized as a merely private matter; our kids will go deeper into debt.

But, as Christians, we know no politician, ever, is going to patch things up perfectly. Christian political engagement ought to resist utopian fictions.

The image of evangelicals as on our heels, obsessing over victory and investing our energy in retaining political power isn't accurate. We aren't seeking political vindication. We don't worship at the altar of civil religion.

Rather, we align with the tradition that includes Wilberforce, Bonhoeffer, and King. Their ethics led them into the public square, and they advocated social changes consistent with the values of their Christian faith. "The law cannot make a man love me," Reverend King once said, "but it can keep him from lynching me, and I think that is pretty important."

As proponents of justice and the common good, Christians must not abdicate the political sphere. Such participation is not a substitution for our first priority, the source of our hope and ultimate joy. No matter the trends, evangelicals like us will insist that there are permanent truths embedded in the world, and that neglecting or abandoning these truth results in harm. 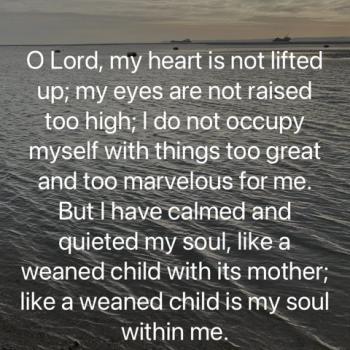 Calming your mind in an age of Covid19
Adrian Warnock
3

Deceiving The Elect
J. H. McKenna, Ph.D.
Get Patheos Newsletters
Get the latest from Patheos by signing up for our newsletters. Try our 3 most popular, or select from our huge collection of unique and thought-provoking newsletters.
From time to time you will also receive Special Offers from our partners that help us make this content free for you. You can opt out of these offers at any time.
see our full list of newsletters
Editor's picks See all columnists