Sometimes self-identified religious voters (especially leaders) do not wish to be affiliated with a political party, perhaps for concern that it will pollute the message and witness of Christ in the world. Analogously, couldn't the same concern be applied to 'religious support' for capitalism or other economic models and systems?

I generally concur with this concern, which is one of the reasons that I am not a member of a political party and have never been one as a priest, and even for a long time before my ordination. To politicize the Gospel is to imply that the Gospel lacks power or credibility in itself and is in need of augmentation.

This is an important point that merits a fresh hearing today. So, how might the values of the Gospel do 'work' in our politics and economy?

I think we need to build a society and its politics and economy out of the values of the Gospel and not the reverse. In fact, historically this is what happened, though this is generally forgotten in many circles today. Theologians (especially those in Salamanca, Spain in the mid-16th century) laid the foundation for what would become economic science. After all, the Church is not a sect; she is in the world, even if not of it, and it has largely been from her understanding of the human person that these institutions which protect the vulnerable, teach, and give aid and comfort to those in need. To have respect for the disciplines of various hard and social sciences does not mean one abandons the priority of the Gospel.

Do you have an example of someone who has models this priority?

I learned a great deal from a French philosopher, Etienne Gilson, who once said, "If one wants to practice science for God's sake, the first condition is to practice it for its own sake, or as if for its own sake, because that's the only way to learn it." He went on to say, "It's the same thing with an art. One must have it before one can put it at God's service. We are told that faith built the medieval cathedrals. No doubt, but faith would not have built anything had there not been architects and craftsmen. If it be true that the west front of Notre Dame is a rising of the soul to God, that does not prevent its being a geometrically composition as well. To build such a façade that will be an act of charity, one must first understand geometry." And then he concluded with this memorable observation, "Piety is never a substitute for technique."

Another common perception (by Protestants and some Roman Catholics) is that the social doctrines of the Roman Catholic Church advocate reasons for a kind of command-and-control form of government and economy. But the teachings of the church are much more nuanced than that, aren't they?

I pause to clarify that my book is not an attempt to outline a specifically Catholic approach to social and economic problems and challenges. It's a more broadly ecumenical consideration that also draws upon natural law reasoning.

With specific regard to Catholic social teaching, one must begin with a clear grasp of what it sets out to do and what it does not set out to do, along with the corresponding authority with which its speaks when addressing such issues.

The Church is not a policy making body; nor does she have or claim to promote any particular economic doctrine. What she does claim is that the constant faith of the Church demands a paramount respect and protection for the dignity of each human life, from conception until natural death, and that because man is prior to society and society is for man (and not the reverse), that prudential actions must be taken to insure that social institutions meet that moral demand. This is the teaching of the Church. The question about how to achieve that end is largely left to prudential actions that the Church speaking as the Church claims no particular competency to define.

Can you offer an example of the role of this social teaching at work?

Given Catholicism's fundamental belief in the intrinsic dignity of the person, it follows that social institutions ought to be constructed to insure people have sufficient means to sustain a dignified life. The question next arises: How is this done? Through an economy dominated by the political sphere, or one in which markets operate relatively freely? That is a question for which the Church gives us principles to think through—the dignity of the person, freedom, solidarity, subsidiarity, a preferential option for the poor, etc.—and which can yield a variety of answers. It follows that my particular argument for a free economy does not amount to saying that "free markets are the doctrine of the Church on economic issues." Rather it is that the free economy, properly understood and grounded upon the principles of Catholic social teaching, is consistent with the Church's teaching. 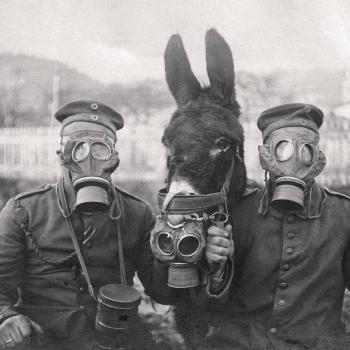 We all have Coronamüde but Wear Your Alltagsmaske: Last Week In Life- 4/19/21...
Mark Wilson
3

Don’t Sleep on Awake’s Spiritual Themes
Paul Asay
Get Patheos Newsletters
Get the latest from Patheos by signing up for our newsletters. Try our 3 most popular, or select from our huge collection of unique and thought-provoking newsletters.
From time to time you will also receive Special Offers from our partners that help us make this content free for you. You can opt out of these offers at any time.
see our full list of newsletters
Editor's picks See all columnists