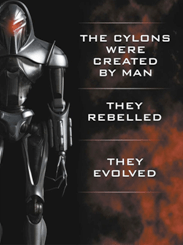 An occupying force trying to mould an alien society in its own image. A government co-opted to act as a puppet regime for the occupying army. Civilians recruited to serve on behalf of the occupiers to hunt down terrorists and saboteurs. Resistance fighters striking back and recruiting suicide bombers to kill their fellow citizens en masse in punishment for collaborating.

An uninitiated television viewer tuning in to see this war unfold, and to watch hand-held camera footage of armed soldiers wearing night-vision goggles and kicking in doors to search for terrorists, would be surprised indeed to learn they were not watching a documentary about the American occupation of Iraq, but rather an episode from the third season of the remarkable science fiction series Battlestar Galactica.

Except of course that American audiences were now required to sympathize with the terrorists, to recognize the cynical justifications of an occupation force, and to understand - if not condone - the motivations of the suicide bomber. None of which would likely have been possible for most audience members had it been a show about the war in Iraq. But as cast in the fictional universe of a civilization adrift in space pursued by robots and synthetic humans of its own making, it became fascinating and compelling television.

On March 20th  the series came to a spectacular yet downbeat conclusion-as it turns out, one day after the 6th anniversary of the launching of the "shock and awe" campaign against Iraq.

When it debuted in 2003 the re-imagined Battlestar Galactica (BSG to its fans) faced a skeptical world, one half-incredulous that anyone would bother to remake that cheesy warmed-over Star Wars clone from the late ‘70s.

What a shock it was, then, to see the new series emerge as a deliberate and uncompromising attempt to confront the aftermath of the September 11th attacks and the "war on terror." From its inception as a mini-series in which humanity is all but wiped out in a sneak attack by a seemingly inhuman enemy, to its almost unrelievedly bleak portrait of a civilization trying to retain its fundamental values in the face of an ongoing threat - and often failing spectacularly - Battlestar Galactica has acted as nothing less than a kind of immersive therapy for post-9/11 America.

Over the past four seasons (spread out over six years) BSG has been widely praised for its outstanding writing and its willingness to tackle - in a fashion almost unheard of on American television - almost every imaginable contemporary controversy you can name. As C.W. Marshall and Tiffany Potter note in their book Cylons in America,

"Indeed, one can almost make a checklist of contemporary issues that the series explores. Plots turn on abortion and reproductive rights, torture and prisoner rights, unions and worker rights, racial division, suicide bombing and terrorism, prostitution, drugs, election fraud, the separation of church and state, the underground economy, police violence and genocide" (p.6) (1)

Perhaps one of the few issues not tackled by the show was homosexuality, which was refreshingly treated as completely unremarkable and non-controversial.

The identification of the show with these and other important issues is so widely recognized that the day before the series finale several members of the BSG cast and production crew were invited to speak at the United Nations Creative Community Outreach Initiative, at which delegates watched clips from the show and discussed their moral implications.

"We are all Cylons, every one of us is a Cylon, and every one of us is a colonial. And you have to get rid of the idea of good guys and bad guys, because the truth is today I may be victimized and tomorrow I may be a victimizer," Craig Mokhiber, from the U.N.'s Office of the High Commissioner for Human Rights, was quoted as saying.

BSG gained this impressive reputation for its refusal to moralize or instruct the audience how to feel about these issues. The deeply flawed and troubled crew of Galactica as led by Admiral Adama (Edward James Olmos) and the civilian president of its fleet President Laura Roslin (Mary McDonnell) must face a morally ambiguous universe and make their own choices. Just like us.

That these characters are just like us is driven home by the series' naturalism and realism. They are not from Earth but come from ‘12 Colonies' including the oft-seen planet Caprica, which is depicted by location shooting in Vancouver, British Columbia. Apart from a few establishing shots of some futuristic buildings and the occasional spaceship in the sky, almost no effort is made to have their culture appear in any way alien from ours or futuristic. Their clothes, homes, cars, technology, food, and interior decorating are wholly familiar to us.