A Voice for Choice 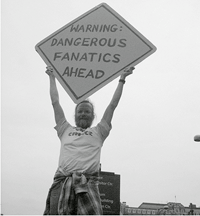 I have not made a baby. As an American woman who is very nearly about to turn 40 years old, this is odd. According to "The Social Health of Marriage in America," a report from the National Marriage Project at Rutgers University, in 1976 one out of ten women in their early 40s was childless. In 2004, it was one out of five. (They could have said two out of ten, but perhaps that would have suggested that it is a less peculiar behavior than society would have you believe). I've had the same urges and curiosities, and concerns, of other women. I have wanted to create life, to duplicate myself - wanted someone to care for me as I age. And I have wondered if I am missing out on the "true purpose" of my existence. And then that all passes, and I revel in my freedoms and singularity.

When I am in this place, I see reproduction as a tool of organized religion. A weapon for patriarchy. When a woman has a child, she will protect it at the cost of her own freedoms and relinquish her own needs and aspirations. These things come second, at best, once a child is in her arms. And I get this. But I see reproduction as a choice, not a requirement.

And that is how I see the issue of abortion. Legality of this procedure would never require that a woman have one. But while rape in the United States is still punished less severely than drug possession, and while spousal rape is condoned in many cultures, women need the option of abortion. So one might call me pro-choice - and not pro-life. Crazy. A few words that are very likely the reason a recent Gallup Poll reported for the first time in its history that more Americans call themselves "pro-life" on the issue of abortion.

This is like picking and choosing the words from the Bible that support your argument and flipping past the ones that seem "outdated." To wit, how many Christian homophobes eat shrimp while wearing woven clothing? See Leviticus 18:22, 11:10 and 19:19. Those kooky Levites.

I wonder when educated progressives will finally be smart enough to use inclusive catch phrases. As a woman who is not a member of an organized - or herd - religion, of course I appreciate the concept of choice. It empowers me and inspires me to make better ones each day. I take as much responsibility for my success as my failure. Not so in the churches where pride is a sin, achievement is God's doing, and missteps lead one to the depths of hell.

Fundamentalists seem to prefer a world with fewer choices, where a "higher" plan is in place, and we are to follow a pre-ordained path. There is little room for choice in herd religions, so it is not hard to see why they have demonized the concept of abortion. Choice was never going to land in their motto. And it will never be a concept they sway towards when confronted with political decisions. When women have choices, sometimes they make good ones.

DISCUSS this article in our forums!