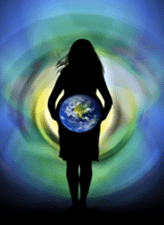 Who speaks for me as a Pagan? I do.

As far as I know, there is no voice of authority that speaks for me to the government, the world, or other religions. I am without a church of any sort that fully supports my belief system.

I've sometimes regretted this. But honestly, I find that I am in control of my worship. Lots of religions have a weekly or bi-weekly worship session. This involves a congregation gathering for the sole purpose of singing praises to their supreme being and/or getting instruction from an expert in their faith. Having been raised Roman Catholic, I know the drill and humor of Catholic aerobics - stand, sit, kneel, stand, etc. But I sing praises to the Universe multiple times daily. It's not necessary that I have a specific building, day, time, and method set aside for this purpose.

While I admired the stoic faith of the elderly as part of their Old World tradition, I balked at the blind faith of my peers and parents. I deny the notion of a preexisting belief system being forced, when it could easily be offered as just one option in a world of choices. I resist the idea that none of us is to question any part of what is being habitually preached. It is unhealthy never to wonder why, never to question authority on something as personal and vital as religion.

Years ago, understandably, I did question. My faith is original in that I came to it honestly, and was not led like cattle. I explored and discovered and edited the texts of most major and some not-so-major creeds. Paganism seems to fit, but there are so many fits in paganism, it's virtually impossible to please all of us all of the time. What a riddle it would be to formulate a Pagan Holy Book for universal worship.

Since I speak for myself, I find issues in my government and social structure. My government does not have a box for me to check when stating my uniqueness from the masses. I am neither widowed, nor Native American, nor "other" - I am a Pagan. Being Pagan means that my section in a bookstore is not in one place but rather many; the books are scattered through sections offensively labeled self-help, psychology, or hobbies. In order to find a book I must ask myself, "How would a Christian organize these books?" Clearly unfair and quite unpleasant.

The general public fails to sanctify Pagan ceremonies. The holy days I honor are categorized as folklore, and this devalues them! It's as if the established religions are declaring them less holy. Yet, each Full Moon is a time of celebration and reflecting. The New Moon is a time to conspire and plan. Summer Solstice and Winter Solstice, commonly and commercially called Christmas in the U.S. and other parts of the world, are ancient in purpose and sacred in principle.

Pagans in the northern hemisphere are approaching a glorious time - the longest day of the Sun shining on our Earth. Summer Solstice is a time of fullness and blessings and wealth. It is a time to celebrate and cherish the Sun and our youth and all that we are alive with! But, sadly, it remains overlooked by the social majority. If I take this day off work to honor my beliefs I will need to use a personal day, not a holiday.

As usual, I will honor my Creator and other Gods and Goddesses with my personal spiritual practices. I find them to be more holy, more sacred, and more powerful than if I were with hundreds of other "sheep." My power arises because my worship is voluntary, not mandated. My new heights of love and joy will flourish as part of my unique way to honor the Earth and Sun and all other powers of Nature. There is power in owning and naming and being One.

Elizabeth Zagorski is a 1993 graduate of Youngstown State University with a B.A. in Religious Studies. She is currently pursuing a career in teaching with a focus in middle childhood education.