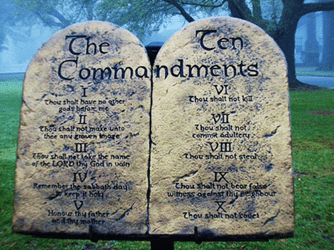 The Children of Israel left Egypt after hundreds of years of slavery and wandered the desert for forty years before entering the promised land of Canaan - later to be known as Israel.

But G-d did not take the Jewish people out of Egypt only to go to another land. He didn't take them out of the slavery of the Pharaohs to go into slavery under another people, faith, or religion. He took them out of Egypt to serve Him.

When they reached Mount Sinai the Children of Israel encountered the most widespread experience of prophecy recorded by mankind. Six hundred thousand men, along with their wives and children, elders and babies, were present at the mountain at the time that G-d came down and spoke the basic tenets of the Jewish faith, the Ten Commandments (Exodus 20:1-14):

"G-d spoke all of these commandments saying:

1. I am Hashem (the way to pronounce the name of G-d without profaning his name) your G-d, that took you out of Egypt from the house of slavery.
2. You shall not have any other gods before me. You shall not make for yourself any statue or image of anything in the heavens above or on the land below, or in the water below the land. Do not bow to them and do not serve them because I am Hashem your G-d, a jealous G-d, bringing the sin of the fathers on the children, the third and fourth generations for those who hate me, and doing kindness for the thousands (of generations) of those who love me and observe my commandments.

3. Do not take the name of Hashem your G-d in vain as Hashem will not absolve any that takes His name in vain.

4. Remember the day of the Sabbath to make it holy. Six days you shall work and do all of your labor. On the seventh day is a Sabbath for Hashem your G-d - you shall not do any work - you and your son and daughter, your servant and your animal and the convert within your gates. For six days Hashem made the Heavens and the Earth, the sea and everything in them, and rested on the seventh day, therefore Hashem blessed the seventh day and made it holy.

5. Honor your father and your mother so that the days of your life on the land which Hashem your G-d gives you will be lengthened.

6. You shall not murder.

7. You shall not commit adultery.

8. You shall not steal (referring to stealing a person - kidnapping).

9. You shall not bear false testimony against your fellow.

The Jewish tradition, based on the text of the Torah and the oral tradition, recalls that the entire Jewish people heard these commandments directly from G-d, and at a certain point collectively found the intense experience of prophecy too great to bear, and came to Moses to request that he receive the rest of the Torah and transmit it to the people:

"The whole people saw the thunder and the flames and the sound of the shofar (ram's horn trumpet) and the mountain smoking, and the people saw and trembled and stood from afar. They said to Moses - you speak with us and we shall hear, but the L-rd shan't speak with us, lest we die" (Exodus 20:15-16).

This scene, unique in all history, where an entire people heard the word of G-d in a moment of prophecy, reverberates throughout Jewish history, tradition, literature, ceremony, and law.

These commandments are the ten basic precepts to which all of the laws of the Torah (literally the Teaching, or the Law) can be traced back. They have formed the ethical center of a people who have stayed together as a nation for over 3,000 years. They are the backbone of the moral code recognized today by many other peoples and religions as essential and just.

At this point in history, so long ago, the word of G-d came to a people just out of slavery and codified for them an unwavering message of how to hold themselves morally steady in a world filled with a multitude of peoples and beliefs, shifting values and shifting loyalties. The Ten Commandments demand an unending devotion to those basic moral tenets: a respect for the divine and for man, and the living of life accordingly - every minute of every day, to the best of our abilities.

Moshe Ben Daniel lives in Israel with his wife and children. His Jewish studies background spans from Jewish day school through Jewish studies in the Hebrew University of Jerusalem, religious studies in Hamivtar Yeshiva in Israel, and continued daily study. He has been involved in the informal education of Judaism for Jewish youth of all backgrounds from all over the world for the Jewish Agency and for various non-profit educational organizations. Over the years he has participated in various intra- and interfaith dialogue and activities. Today (when not writing for PATHEOS) he is a practicing architect in Jerusalem, Israel.