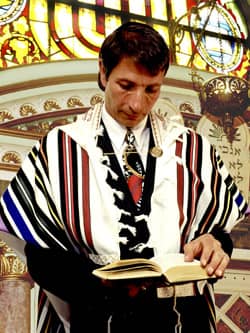 While anyone can recite verses by rote, only you can commune with the universal, the infinite, the divine, in your own special way.

Another kind of dialogue entirely is prayer. In prayer, man can praise God, thank God, or make requests of God. Often all three at once.

The concept of God in Judaism must be discussed on its own, and I shall not do it justice here. Suffice to say that God is all knowing, all seeing, all powerful, and all encompassing. He is everywhere, in every thing. He is the Creator, the prime source from which everything springs, and without him there would be no world in which to live. To paraphrase a Hasidic idea: "God is everything, and God created everything."

Essentially there are two ways to approach God: through love, and through fear, or awe. And how does this lead into a conversation? Well it doesn't make it easy. It is told of one great rabbi that he started his daily prayers, reached the second word "Blessed are YOU," and remained motionless without continuing as the full meaning of the word "YOU" struck him.

And so, the sages in their wisdom created for us some set formulae, standardized prayer, that would take the burden off thinking of what we are going to say to God, and place it on how we say it. Because in the end, there is nothing that you could tell God that he doesn't know, nothing you could ask him that he didn't know you wanted, and no praise that you could give that couldn't have been given by another, in better terms. Does that mean that Shakespeare would have been the greatest prayer practitioner in the English language? No. Because what is important is how you say the prayer, and what it does to you.

Daily prayer is three times a day. On festivals and holy days four times, and on the holiest of all, Yom Kippur, five times.

Morning prayers consist of several forms of blessings, acknowledging and thanking the creator for those things that we must not take for granted -- the ability to wake up in the morning, to get up and move about, and many more of the most basic things we do. After this, we have a framework of preparatory prayers, psalms and blessing that lead us into the heart of the morning prayer -- the "Shema" (literally "hear") and the "Shmonei Esrei" (literally "18"). After these are prayers evoking the greatness of God.

Afternoon prayers are shorter, with a psalm followed by the Shmonei Esrei and then "Alenu" starting "It is incumbent upon us to praise the Lord of all..."

Evening prayers are made up of Shema, Shmonei Esrei, and Aleinu.

The Shema is the most fundamental of all prayers "Hear O Israel, the Lord is our God, the Lord is One" (Deuteronomy 6:4). It contains three paragraphs from the Torah, and outlines our acceptance of God as the divine and the commandment to love God, our acceptance of the yoke of his commandments upon us, our obligation to pass his teachings on to our children, the promise to reward us for our carrying out of the commandments, the reminder of the consequences of not doing so, and the reminder to keep these laws in our minds at all times.

Most Jewish prayers, the Shmonei Esrei included, are typically related to an entire community or the whole nation or the entire world, not specifically to the individual saying them. Except for under special circumstances, prayers are said within the community, at a gathering place such as the synagogue, the power of the prayer of the congregation being far greater than that of the individual.