Blessed are the Dead which Die in the Lord 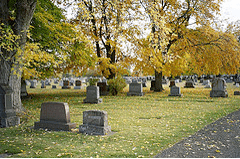 The words of Revelation 14:13 were frequently uttered during the funeral sermons of 19th-century Mormons. In the late summer of 1831 - still in the earliest years of Mormonism's development - Joseph Smith revealed the voice of the Lord and employed the same language: "Yea, and blessed are the dead that die in the Lord, from henceforth, when the Lord shall come, and old things shall pass away, and all things become new, they shall rise from the dead and shall not die after, and shall receive an inheritance before the Lord, in the holy city" (Doctrine & Covenants 63:49). The first year of the Church's existence was an explosion of radical doctrine relating to sickness and death, and this revelation ensured the felicity of those faithful who died.

American Christianity in 1830 was governed by the doctrine of cessationism - the view that the age of miracles had passed, including miraculous healing. Orthodox Christians embraced a belief in providence, or the view that God's will is determinant and that divinity is manifest even in suffering and death. Believers encouraged the dying to face death stoically, knowing that through passive resignation to God's will all were glorified.

Joseph Smith was well-acquainted with death; he lost his older brother Alvin and his first child during the acquisition and translation of the Nephite plates. And the Book of Mormon, which came from those plates, proved formative in Smith's developing theology, which was aimed at reliving the biblical world. The Book of Mormon emphatically rejected cessationism, claiming that miracles and healings cease only with the cessation of faith, and Joseph subsequently received revelations affirming healing by the laying on of hands.

Smith struck out against formalism in a manner that opened access to God and his power. He wanted his people to have the power to heal, and yet, death remained a persistent foe. Miraculous accounts of the sick being healed abound in Mormon history, but so, too, do stories where life failed. In February 1831, the voice of the Lord declared "that he that hath faith in me to be healed, and is not appointed unto death, shall be healed" (D&C 42:48).

This revelation assured the nascent Church that the faithful were to be healed; but it also noted that the will of the God was not to be overturned by the intentions of his people, faithful though they may be. And God willed that some die for his own purposes. This Mormon providence, however, was evident only at the deathbed, and Latter-day Saints consequently marshaled their faith in vigorous ritual administration and botanic remedies.[1]

If one were to die, however, it was important to die in the Lord. The revelation that employed this verbiage also referenced the resurrection - the final triumph over death - and the "holy city" wherein the quickened righteous dwell. As the Latter-day Saints moved from Ohio to Missouri and finally to Illinois, Joseph Smith also revealed his ultimate theology of the temple. The temple in Nauvoo was a place for men and women to be endowed with power, a place where the sick were to be healed and a place where the living and the dead were to be sealed into one cohesive salvific family. Death persisted, but the bonds and heirship formalized in the temple created enduring relationships, spanning life and death. With the hope of resurrection and the preservation of earthly friends and kin in the eternities, death lost its sting.

Furthermore, Joseph Smith revealed that humanity existed before mortality as spirits and that we all accepted the ramifications of mortal life before being born. As such, Mormons typically view matters of life and death in terms of this sacred contract. While the Church views abortion as generally sinful (with several exceptions), it does not view it as murder or the sending of the unbaptized soul to hell. The Church proscribes euthanasia, but individuals may choose what and how much medical treatment to use. Modern medicine has improved and extended the quality of life; but it has also complicated the interaction of the living with death. Mormons believe that negotiation of that complicated interaction should be according to God's will.

Like their spiritual progenitors modern Mormons are counseled to seek miracles; but they are also reassured that if they do not prevail, they "have power to become my sons," an allusion to salvation. The good death in modern Mormonism is the culmination of a life of faith and is defined by the hope of resurrected life in the city of God with their kin.

1. Latter-day Saints rejected "Heroic" allopathic medicine in favor of the botanic cures popularized during the Second Great Awakening.  Though early Mormons did not employ traditional medical therapies, as soon as medicine became clinically viable, they converted to its use.  Brigham Young's support of men and women studying medicine in the East and the establishment of Deseret and LDS Hospitals are examples of this transition.

Jonathan Stapley has a doctorate from Purdue University and is an executive at a firm that is applying his graduate research to the industrial world. He is also an independent researcher in Mormon history, and currently serves on the Editorial Board of the Journal of Mormon History.