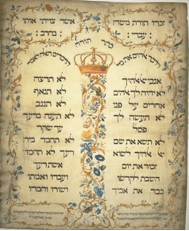 Part of the experience of the festival of Shavuot is to participate in an all night study session called tikkun leyl Shavuot -- literally an "Enactment for the Night of Shavuot," which is best understood in the context of the holiday itself.

The Jewish holiday of Shavuot, or "Weeks," falls this year on this weekend - Friday May 29 and Saturday May 30. It is mentioned in the Bible [Exodus 34:22] in its agricultural context, "And thou shalt observe the feast of weeks, of the first fruits of wheat harvest, and the feast of ingathering at the year's end," but its importance to Jews lies in its ascription to the time of God's giving of Torah to Israel on Mount Sinai. (Note: "Israel" as a noun here and in religious literature refers to the children of Israel, i.e. the ancient Israelites, or Jews in general, not necessarily the modern political state.)

God's relationship to Israel is described by many metaphors and notable among them is that of groom and bride, which makes the Torah itself a combination of marriage contract and trousseau. In the liturgical calendar, Israel left their condition of slavery in Egypt on the holiday of Passover and is free to "marry" God on Shavuot. As with all weddings, there is preparation required and that is the way the seven weeks between the two holidays function. And like with all preparations, the night actually before the event is the most nerve-racking and filled with anticipation.

Thus developed the "Enactment" - the great custom of staying up all night studying Torah the first night of Shavuot. Jewish holidays, of course, start at sundown, so this year Shavuot begins Thursday night. All-night study accords with the two aspects of the metaphor - first, you can't sleep when you're so filled with anticipation, and second, you want to be as prepared as possible for the most important event of your life. Israel wants to be worthy of the gift of Torah.

Torah study can be accomplished variously. You can intrepidly and on your own read selections from the Hebrew Bible (the Book of Ruth is often read on Shavuot), the Talmud, or any of the canonical collections of Jewish law and lore. It is traditional, however, to work with a study partner. Another popular and stimulating way is to attend classes, which are led voluntarily in synagogues and homes. Having lived in Jewish neighborhoods in New York, Los Angeles, and Jerusalem, I've been enchanted by the sight of people wandering from class to class at all hours of the night.

Once dawn approaches, you begin morning prayers. Even if you pray every morning as traditional Jews do, this morning is much earlier than most of us are used to and you are wired and tired as with after any good all-nighter. It is very powerful having been through the experience of learning with colleagues and what seems like all Israel. When the liturgy intones zman matan torah - this is the time of the giving of Torah, you really feel it, and feel that the "Weeks" - literally the seven weeks since Passover - successfully prepared you for your relationship with God and Israel to progress to a new level.

David Mattis is a third year rabbinic student at the American Jewish University's Ziegler School of Rabbinic Studies in Los Angeles, California. In addition to wading in the infinite wellspring of Jewish religion and culture, and when not entertaining fantasies of learning every language on Earth, he is involved in Jewish-Christian and Jewish-Muslim dialogue.