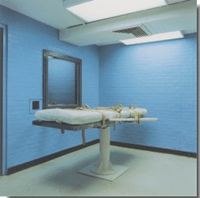 Like war and abortion, the death penalty remains a controversial ethical question in our society, especially among Christians. How does a Christian balance legitimate concern for justice and safety, which grows out of the command to love one's neighbors, with the affirmation of the sacredness of human life and Christ's injunction to forgive?

My own engagement with the death penalty began in 1996 when I started writing to and visiting a death row inmate in Georgia. Mark was sentenced to death in 1995 for the murder of a pizza store manager during an armed robbery. He shared with me how he had dropped out of college after his mother's death and got caught up in a life of crime and drugs. Mark's spiritual transformation in prison made repentance central to his life. He often spoke about how sorry he was for his past actions.

Through my long friendship with Mark and my study of Christian ethics, I am convinced that Christians today must join with those calling for an end to capital punishment. There is a better way to protect our society from violence than killing those who perpetrate it. We no longer have to choose between justice and life.

The Bible does not give a simple answer about the death penalty. Christians must engage texts that indicate that execution can be ethically justified along with texts that favor forgiveness and non-lethal methods of justice. The ancient Israelite tradition of reciprocal justice ("an eye for an eye") clearly states that "one who kills a human being shall be put to death" (Lev. 24:19-21; see also Ex. 21: 12-14, 23-25). And Paul's letter to the Romans seems to suggest that earthly governments have a divinely constituted authority to "bear the sword" in pursuit of justice and safety (Rom. 13:1-4).

On the other hand, in the Hebrew story of Cain and Abel, God punishes Cain for the murder of his brother but mercifully protects him from the lethal vengeance of society (Gen. 4:1-16). This theme of mercy is continued in the New Testament in the story of the woman accused of adultery (John 8). While the Jewish law commanded death for adultery (Lev. 20:10), Jesus pardons the woman by declaring: "Let anyone among you who is without sin be the first to throw a stone at her" (John 8:7).

The Christian church's response to the death penalty has varied over time, although there has been a consistent trend toward limiting executions. Most mainline Protestant churches now have official statements against the use of the death penalty, including the United Methodist Church, the Presbyterian Church (U.S.A.), and the Episcopal Church. Furthermore, because of the disproportionate number of poor people and minorities on death row in the US, many grassroots Christian organizations see the struggle to end the death penalty as following Jesus' command to serve "the least" in our society (Matt. 25:40). Groups such as North Carolina's People of Faith Against the Death Penalty, The Open Door Community in Atlanta, and the international organization The Community of Sant'Egidio combine concrete ministry to those in prison with political advocacy against the death penalty.

Christians must also consider wider ethical trends toward ending the death penalty based on fundamental human rights, concern for wrongful convictions, and the existence of less costly alternatives to executions, such as life in prison. More than two-thirds of the world's nations today have abolished the death penalty through actual law or practice, and the European Union made abolition a condition of membership. In fact, in 2008, 93% of worldwide executions were carried out by only five countries: China, Iran, Saudi Arabia, Pakistan, and the US.

Although the U.S. still condones executions, it too has steadily been moving away from the death penalty. Supreme Court decisions in 2002 and 2005 declared the use of the death penalty unconstitutional in the case of the mentally retarded and minors. Furthermore, as more people recognize the financial burden of capital punishment and evidence of false convictions, there is also a movement against the death penalty at the state level: a moratorium on executions was declared in Illinois in 2000, New Jersey and New York voted to abolish the death penalty in 2007, and just this year, Governor Bill Richardson signed a bill repealing the death penalty in New Mexico.

My friend Mark still sits on death row today - fourteen years after being sentenced to death. Christian faith in the sacredness of every human being and Jesus' message of forgiveness demands that our society and I find a better way to repair the damage of violence than by killing Mark or holding him in indefinite legal limbo. Practical, alternative models exist that would allow us to choose justice with life; all that is lacking is our moral will.

Sarah Moses teaches in the Department of Philosophy and Religion at the University of Mississippi and is a doctoral candidate in theological ethics at Boston College. She is a member of St. Peter's Episcopal Church (Oxford, MS) and is active in the ecumenical lay organization The Community of Sant'Egidio.