Christians in the News 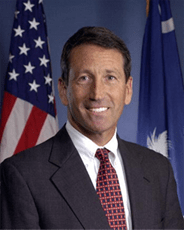 Another week, and another prominent Republican politician with ties to conservative Christians admits an affair. On the heels of last week's admission of infidelities from Senator John Ensign, South Carolina Governor Mark Sanford confessed his own illicit relationship, in this case with an Argentinean woman named Maria. Although Sanford has not been known as a conservative Christian, the New York Times found the Evangelical angle immediately, noting that Sanford and his wife had recently joined "an intensive Bible study group for couples" associated with "Columbia International University, a conservative evangelical college." But more disturbing, Columbia, South Carolina's The State newspaper printed intimate emails between the governor and his mistress, in which Sanford quotes from 1 Corinthians 11 to describe his sacrificial love for the other woman. Makes you wonder if Sanford came across that passage in his recent couples Bible study or was merely recalling his own wedding vows. Sanford, once considered a front-runner for the GOP Presidential nomination in 2012, also apparently used state funds to travel to South America for his tryst.


Speaking of wedding vows, affairs, and tabloid rumors, TLC told us this week what we all knew for months: that Jon and Kate Gosselin are heading for separation. The reality TV stars and Assemblies of God church members had become heroes in some Evangelical circles -- before the revelations of Jon's late-night escapades. Given the Gosselins' decision to keep all six fetuses in the face of an extremely risky pregnancy, Evangelicals supported the young family by watching their show in large numbers, buying their books (published by Zondervan), and inviting them to speak at Christian conferences.

Who would flinch at Kate's withering attacks on her husband when she was signing books about family life at women's conventions? Who could question their initial decision to knowingly inseminate at least four hyper-stimulated follicles when Jon wore those great American Eagle-esque Isaiah 40:31 T-shirts? With the welfare of so many precious kids at stake, perhaps these cynical jabs are inappropriate, but there are moral lessons here for Evangelicals, who eagerly embraced a cable show that made raising children a sideshow circus and extolled Jon and Kate for not choosing abortion but overlooked their pursuit of reproduction and fame at all costs. Pastor and blogger Eugene Cho had some of the best advice for the couple, urging them to turn off the cameras and get into Christian community. Yet one wonders whether Christian communities are not partially to blame for this mess in the first place.

Can't find a place to brandish your rifle in one hand and Bible in the other? Want to celebrate both the second amendment and the second commandment together this Fourth of July? Well, here's the church for you. New Bethel Church in Louisville, KY had an "open-carry service" on Saturday, June 27th to celebrate the twin rights of bearing arms and raising hands. Pastor Ken Pagano told Time magazine that they wanted to make a statement about local gun laws, emphasize firearms safety, as well as "think outside of the box and increase outreach." The church's insurer was less certain about the compatibility of these desired outcomes, especially in light of recent tragic stories of gun violence, and refused to insure the event. Due to these concerns, many carriers without permits for concealed weapons had to keep their pistols "in the box" and their shotguns on the truck racks, though they could still enter a $1 handgun raffle. Other Christians protested vehemently. One pacifist group held an alternative service called, "Bring Your Peaceful Heart....Leave Your Gun at Home."


png?w=151&hash=7492298BF52B11EACE4C5288155D5BC1BCBDF524" style="margin: 6px; float: left;" width="151">In news unrelated to guns or sexual escapades, the National Association of Evangelicals appointed a new Director of Government Affairs this week, naming Galen Carey its chief political liaison. Carey replaces Richard Cizik, whose controversial positions on global warming and gay marriage led to his resignation in December 2008. After confessing in an NPR interview that he may be leaning toward supporting civil unions for same sex couples, Cizik found himself caught in the crossfire of more conservative Evangelicals like James Dobson, who had long resisted his advocacy of "Creation Care." After twenty-eight years of work for the NAE, Cizik had to leave within days of his NPR interview. Carey brings a less public profile and a more international agenda to the position. Transferring from the NAE's international aid and development side, World Relief, he has over two decades of experience working with them in Africa and Indonesia, as well as a stint under the United Nations High Commissioner for Refugees in Croatia during the Balkan Wars. But Carey also promises to push some hot buttons of his own. He speaks fluent Spanish and hopes to make immigration reform a priority, which is consistent with official NAE policy statements, but might not please conservatives like Dobson who still see abortion and same sex marriage as the decisive moral issues of our day.