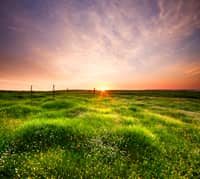 The trouble with paganism is this: there's no one looking over your shoulder.  No god watches from his comfortable cloud, ready to send down a thunderbolt if you slip up, or keeps a ledger of your actions for post-mortem judgment.  Pagan gods and goddesses are embodied in nature, and to the extent that they concern themselves with human doings, it is in the larger context of their stewardship of the natural world as a whole.

Whence, then, the motivation to lead an ethical life, and what might that life look like?  Two precepts keep pagans (mostly) in line:  the Wiccan Rede, originally published by Doreen Valiente in 1964, advises "An it harm none, do as ye will,"  while a more self-interested principle, known as The Rule of Three, warns that everything you do returns to you three times.  The first is law, the second law enforcement; don't hurt anybody, because if you do, you'll suffer for it.  Who needs an angry god when karma stands at the ready?

The Wiccan Rede, or some variation thereon, is about as close to a commandment as most pagans are willing to get.  It seems simple enough at first glance, but that very simplicity makes interpretation a formidable challenge.  What constitutes "harm," after all?  Physical assault obviously qualifies, but most actions fall into a grayer area.  Gossip about a colleague, neglect to give up your seat on the bus to an elderly person, tell your niece you're too busy to go to her school play; have you harmed anyone?  For that matter, what constitutes "none"? Is a pagan's responsibility limited to other humans, or is there a spiritual duty to take in stray animals, or to recycle?

Virginia pagan Kelly S., who considers her spirituality integral to her life, says "I believe in light and love and a universal connectedness, and so . . .  I make choices in life with that in mind, for instance, choosing to lower my 'ecological footprint' or always working to keep my business local."  Such environmental consciousness is often encountered among pagans, whose traditions include herbal lore and outdoor worship.  Kelly and her family run an organic farm, and the goal of sustainability drives their growing and harvesting practices. When she recently opened a business, Kelly chose a location close to her home over one a bit farther away, despite its somewhat higher rent, in a conscious effort to limit her driving in keeping with her principles.

Lacking a confessional booth or a bible, pagans must connect to the divinity within to find answers to tough spiritual questions.  The Charge of the Star Goddess holds, "if that which you seek, you find not within yourself, you shall never find it without." Chanting, meditation, dance, or reading tarot cards are all methods used to receive wisdom from the divine which infuses all beings.  Across the wide array of pagan traditions, instinct, intuition, and a close bond with the natural world are important to the lives of practitioners. "I believe that birth and death are sacred moments that should be experienced within the context of one's spirituality," says Kelly S.  "To that end, I chose to birth all my children at home with only intimate family and friends to witness, in an environment where I could be completely in touch with my instincts. I was tapping into the universal force that runs through all of us, what some people call God, or the Goddess, or Ganesh, or what ancient Greeks called Zeus and Athena.  I also helped my my mother die at home in the most honest and organic way we could, and after she died I washed her body and we kept her in the house until the funeral.  I felt the same force running through everyone involved in her death, through our house and our land."

Everything you do returns to you three times.  The Rule of Three is not a threat from any supernatural being or deity, but a statement of natural law.  Every action, from a smile to a brick thrown through a window, has consequences for the actor.  Thus the Rule is not a warning to beware, but an encouragement to be aware.  This awareness, this constant checking-in with the divine, this connection with each other as humans and with nature is at the center of pagan spirituality and pagan lives.