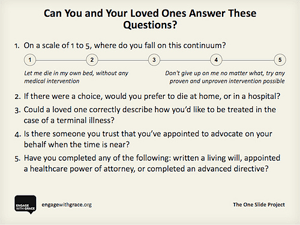 "Oh, she's going to die soon! I can't handle the thought of it. Alexis is puking every day and is too weak to move. She has end-stage cancer and is in excruciating pain. She and the doctors want to hasten her death through euthanasia. But that is wrong because it is the doctor killing her. All life is sacred and only God should be able to decide when she dies."

"Oh, she's going to die! Alexis is suffering so much with cancer and is not able to live the way she wants. She is in her last days of life and has decided with the doctors, family, and friends to take the route of euthanasia. I hope that makes the transition to death easier for her and I respect her decision."

These are two opposing views on the practice of euthanasia. Euthanasia is "the intentional killing by act or omission of a dependent human being for his or her alleged benefit."1 There are four types of euthanasia: active, passive, voluntary, and involuntary. Active euthanasia is a case of killing and passive is a case of letting die. Alexis is a mentally competent woman who has decided to petition medical practitioners in her decision to end her life now instead of suffering any more. She wants passive euthanasia.

From the perspective of biomedical ethics, a medical professional is first and foremost supposed to uphold the Hippocratic Oath. The Oath contains within it the maxim "above all else do no harm." The medical staff should be practicing beneficence-never maleficence. But is allowing Alexis to die the way she wants harming her? What causes more suffering? Remember, Alexis is going to die soon regardless.

In order to address this from the Pagan perspective it is important to examine the western Christian view of dualism and preservation of life. Traditionally in Christianity, and in our culture, we are shrouded in the ideology of dualistic beliefs about death. These dichotomies include god/devil, right/wrong, good/evil, light/dark, heaven/hell, and death/life. We come into the world as sinners at birth and our lives center around committing "good" acts so we may, after death, enter heaven. Release from sin happens then. If that is the case, then doctors have no right to take Alexis' life. That would be killing her, which is a sin. So, how does a Pagan view the birth and death cycle?

Most Pagans do not view the world dichotomously. Death is not a good or bad thing. The western mindset, informed largely by the Abrahamic religions, have created that concept. "To the pagan, it is just a process of life and when it's time to move to the next journey, then death is just a process to do so. The body dies but the spirit lives in energy and will be recreated. It is a cycle of life and all things that live, die, and live again in some other life form, be that reincarnation of the spirit or giving back the spirit to move into some other form of life."2 It is a tapestry woven together with birth, death, and rebirth.

Pagans view the vicissitudes of existence as interconnected fabric in the whole ensemble. The view is not that the sanctity of life is paramount but respect for individual and quality of life is the paramour. So the whole destruction of life is moot. If the quality of life is not there-as defined by Alexis-and she chooses euthanasia while cognizant, then the moral is has been resolved.

In medical ethics, this is the principle of autonomy. The patient's decision takes precedence over everything else as long as they are aware and able to decide their own death. Alexis consciously decides to end her life on her terms and is aware of what she is doing. If the practitioner decides to help her with this when her suffering outweighs all other factors, then Alexis should be allowed to die with dignity. Rather than killing, it is "letting" her die-and it is the humane thing to do.

Needless suffering trumps everything in the debate. The doctor is there as facilitator, not culprit. All humans die. If we choose to do it on our terms and medicine will help in our process, then so be it. Since death is part of the cosmic outfit, why not allow the dying to adorn herself in whatever garb she wants to wear for the final dance?

Melinda M. Wilding holds a B.A. in Philosophy and an M.A. in Biomedical Ethics.