Finding (or Avoiding) Answers to the Big Questions…at the Multiplex 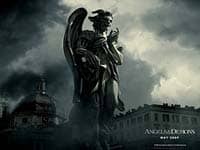 As the economic crisis grinds on, Americans are heading to the movie theaters in record numbers, though church attendance has remained steady--about 40 percent of us attend a religious service each week, a statistic that hasn't changed since the phrase "toxic assets" became a part of everyday conversation back in October.

Does that mean that jittery consumers are opting to numb out rather than seek spiritual comfort? Or are they actually finding something deeper in the current cinematic fare? This summer's lineup of big-budget movies features some pretty striking religious themes, so a closer look at what's at the multiplex is definitely in order.

Any mention of this summer's religiously-themed films inevitably begins with Angels and Demons. The follow-up to The Da Vinci Code hasn't created near the controversy, but did manage to rake in about half of the $77 million the first Dan Brown adaptation earned throughout its own opening weekend. For a film that hasn't been accused of falsifying the history or corrupting the morals of Western civilization--as New York Times film critic A.O. Scott put it--that's not too shabby a showing.

Whereas The Da Vinci Code theorized about Jesus Christ's secret love life (specifically his fathering of a child with Mary Magdalene), "Angels and Demons" has Harvard symbologist Robert Langdon battling to save the Vatican from the pro-rationalist terrorist underground network known as the Illuminati--all the while making the argument that, yes, science and religion can, and should, coexist.

But Angels and Demons is far from the only Big Question blockbuster on the silver screen this summer. The fourth film in the Terminator series, Terminator: Salvation, which is set in post-apocalyptic 2018--when the artificial intelligence system Skynet has taken over the world and only a small concentration of humans remain--explores the question of what it means to be human all over again. Amid lots and lots of explosions.

And the sixth film in the Harry Potter series, Harry Potter and the Half-Blood Prince, will undoubtedly revive arguments over how Christian or un-Christian the movie and the book series by J.K.Rowling actually are (or aren't). While some believers perceive a dangerous endorsement of witchcraft in the children's saga, others compare Rowling's books and the film adaptations to perennial Christian favorites like the mythical, allegorical worlds created by authors C.S. Lewis and J.R.R. Tolkien in The Lion, Witch and the Wardrobe and The Lord of the Rings.

These highly anticipated flicks may seem to have little in common with one another, but in their exploration of existential religious themes, they, like other upcoming summer releases, are a far cry from the more overtly biblical movies of the earlier part of the 20th century or the feel-good, miracle-centered television programs like "Highway to Heaven" or "Touched by an Angel" that were watched by millions in the 80s and 90s.

This new trend in religiously laced programming "to some extent has become an emerging genre," both on the small and big screen, says Robert Thompson, director for the Center for the Study of Popular Television.

Thompson says that part of the reason this particular genre has developed is because religion asks tough questions that no one else can answer: Why are we here? What is the meaning of life? Is there life after death? And with more people consuming a wider array of media, that's often where they're looking for--and perhaps finding--their answers.

Audiences can expect a good amount of sophistication from this genre, Thompson says. They can also expect the offerings to be darker than they once were.

What are some of the other upcoming summer releases that pursue these big queries? Well, nothing gets darker than a horror flick that crackles with the supernatural.

This week, Sam Raimi, the director of the Evil Dead trilogy and Spider-Man movies, is back with his first horror film in over 20 years with Drag Me to Hell. The grim realities of the current economic downturn will undoubtedly make audiences cringe all the more, is the main character, an ambitious L.A. loan officer eager to impress her boss, turns down a request by an elderly woman for an extension on her mortgage loan. Bank employee Christine Brown (played by Alison Lohman) spends the rest of the film trying to escape the curse placed on her by the vengeful homeowner--a malediction that literally threatens to drag its victim to hell.