From Ghetto Girl to Rabbi's Wife

My childhood years in Washington Heights, an inner city New York offshoot of the Dominican Republic, were Rapunzelesque. I watched the goings-on in the 'hood from our sixth-floor apartment, which towered over the hilly area. My sisters and I weren't allowed to play outside because of the drug dealers, the culture, and the language, all of which my mother was sure were veneno--poison. According to Mom, Spanish was okay, English even better, but "talking Ghetto," the Spanglish slang of the streets, was no good.

I learned about religion watching The Ten Commandments over Easter. On Sundays I attended catechism classes at the local Catholic school. At home my mother practiced a blend of Catholicism and Santeria (Afro-Caribbean "voodoo"), taking me to brujas (witches) to cure my allergies. I had no idea that only blocks away, in the midst of my Dominican ghetto, there was a Jewish neighborhood.

So how in the world did I find my way to Judaism?

It started with a car ride. My best friend, Igor, a Russian Jew, had gone to Israel an atheist and come back Orthodox. Driving around the neighborhood with me and my sisters, he thrilled us with tales of going kosher, living life as an observant Jew, and scaring all his old friends. He wore a black kippah, soon to be coordinated with the white shirt and black pants that would become his signature wardrobe. I was wearing a halter-top and short shorts. All I knew was that Judaism meant I wasn't allowed to hug him anymore.

"Wow! That's so interesting. Tell us more!" my sisters chorused from the backseat. And then to me: "You should be Jewish! You always wanted to be Jewish. Remember?"

When I was 13, a visit from a Holocaust survivor to my junior high school had piqued my interest in Judaism enough that I stole the Star of David my mother kept with her cross and wore it every day. I went to the library's religion section, where I discovered that the Jewish notion of G-d matched the one I'd always had in my head and heart. G-d was always watching over me and always listening. There were no intermediaries standing between us.

"Mom, I want to be Jewish," I declared one day, running to her in a frenzy of excitement, books in hand.

My mother's lips curled in horror before she reeled her arm back like a baseball pitcher and cracked a slap across my face. Later, various family encounters would teach me that anti-Semitism was alive and well in the world. I put Judaism on the back burner.

At 25, I tried going back to the church. I hoped Protestant Christianity might be less fire-and-brimstone than Catholicism. But the calculation that no Jesus equals eternal damnation didn't sit well with me. So when my best friend started talking, I was intrigued.

Two months later, I was knee-deep in Jewish books and had an appointment with an Orthodox rabbi. No Jesus. No Trinity. No more scary confessions to priests. No nuns looking perturbed when they asked all the students to draw G-d and I held up a drawing of a giant yellow squiggle and said, "God is light." In my head, G-d was as bright and warm as a sunburst, always lighting the way ahead. Even at 8, I wasn't drawing Jesus idols.

Over the year I became a constant presence in the synagogue office. I took weekly classes. I assaulted the rabbi daily with questions via e-mail. I read late into the night and listened to educational MP3s on the way to work. I was a human iPod, downloading a lifetime of Jewish learning into my brain.

I saw Judaism as an extension of the personal relationship with God I had already honed over years of angry rants and silent wishes aimed at the heavens. I got high on how Judaism could teach me to make every action in my life holy and how to focus on bettering myself for my time on Earth, not as a ticket to Heaven.

Judaism began to color all the areas of my life. I bought my last pair of pants from the Gap and a week later sold them to a fellow teacher at the high school where I worked. I charged knee-length H&M skirts by the dozen. I prayed all the time and for everything. And when I discovered Shabbat, I sighed with relief. Shabbat was the first vacation this workaholic had taken in a long time.

I finally confessed my decision to convert to my father in an international call to the Dominican Republic. "Dad, I'm going to be Jewish. You're going to have Jewish grandchildren."

After a long pause, I heard a faint chuckle escalate into booming sputters of laughter. "You're crazy!" No, I assured him, I wasn't.

But still I was a stranger. My olive skin was much darker than the Ashkenazi faces I saw at shul (synagogue). People stared at my curly Afro. When I told my non-Jewish friends that people at shul complimented my "tan," they reacted in disbelief: "But you're so white!" 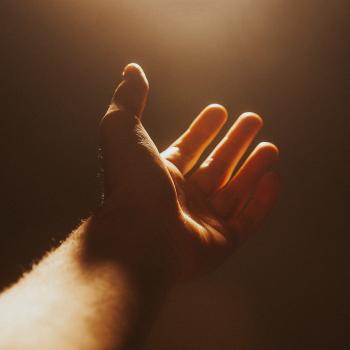 So, You Wanna Be A Christian?
Matthew Distefano
Get Patheos Newsletters
Get the latest from Patheos by signing up for our newsletters. Try our 3 most popular, or select from our huge collection of unique and thought-provoking newsletters.
From time to time you will also receive Special Offers from our partners that help us make this content free for you. You can opt out of these offers at any time.
see our full list of newsletters
Editor's picks See all columnists