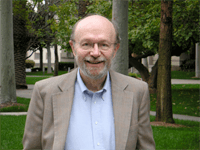 I was deeply moved when in his address in Cairo, President Obama said "freedom in America is indivisible from the freedom to practice one's religion. That is why there is a mosque in every state in our union, and over 1,200 mosques within our borders."

My own Baptist denomination from our very beginning in England in the 17th century struggled for the human right of religious liberty not only for Baptists but also explicitly for Catholics, Jews, and Muslims. Religious liberty is crucial for peacemaking.

And I was deeply moved when Obama said, "For centuries, black people in America suffered the lash of the whip as slaves and the humiliation of segregation. But it was not violence that won full and equal rights. It was a peaceful and determined insistence upon the ideals at the center of America's founding... Violence is a dead end. It is a sign neither of courage nor power to shoot rockets at sleeping children, or to blow up old women on a bus. That's not how moral authority is claimed; that's how it is surrendered." I have participated in that nonviolent struggle of black people in America, and I participate in the struggle of Israelis (and Palestinians, too) for freedom from violence.

His audience was moved to double applause when he declared, "The United States does not accept the legitimacy of continued Israeli settlements. (Applause.) This construction violates previous agreements and undermines efforts to achieve peace. It is time for these settlements to stop. (Applause.)"

The U.S. government annually gives Israel $3 billion. President George Bush senior cut back $1 billion when Israel refused to stop expanding the settlements. Suppose the U. S. devotes a portion of the $3 billion to offering to purchase houses and apartments from Israeli settlers at very generous prices. The settlers would be required to invest in purchasing their new dwelling back in Israel, thus contributing the money to Israel's economy. But now the money would do some good for peacemaking rather than for purchasing more Israeli weapons. It would reverse the present government-subsidized financial incentives for Israelis to settle in the West Bank. Palestinians would see the number of Israeli settlers decreasing, rather than always increasing. They would have hope and incentive for making peace. And it would be implemented by free decision of settlers rather than having to wait for a stalemated Israeli government to reverse its policy.

In 1967, Israel occupied all Palestine by military force, in response to Arab attacks on Israel. By 1996, 140,000 Israeli settlers were occupying land in Palestine's West Bank with support from Israeli military. Since 1996, this occupation has doubled to 262,000 by 2006, and 300,000 by 2009, in 120 settlements and 100 "outposts." In a recent seven-month period, 1,000 additional buildings were built for Israeli settlers on Palestinian land. This is an intentional land grab supported by military force and financial incentives from Israel's government. The settlements are serviced by access roads that carve up Palestine and cannot be used by Palestinians. 600 checkpoints block Palestinian travel within their own land. The roads and checkpoints make access to hospitals, schools, family members, farms, economic trade, and jobs nearly impossible. That is not freedom; that is coercion, by military force. Now The Wall blocks off additional Palestinian land from access by its owners, including farmers who cannot get to their own farms. A map of the West Bank looks like a case of the measles, with red blotches for settlements everywhere on the land.

This may be the biggest cause of Palestinian and Arab anger against the United States as well as Israel. As President Obama is saying, reversing the encroachment of settlements on Palestinian land is crucial to achieving a peace settlement, security for Israel, justice for Palestinians, peaceful relations between the United States and Arab countries, and reducing anger and recruitment of terrorists.

Glen Stassen is Lewis B. Smedes Professor of Christian Ethics at Fuller Theological Seminary. Stassen is the author of several books including Living the Sermon on the Mount and editor of Just Peacemaking: The New Paradigm for the Ethics of Peace.