And, why is there so little of that largest genre in the LDS market?

If you haven't guessed, the largest genre is mystery/detective fiction, which, according to R. R. Bowker's PubTrack service, accounted for 34% of all fiction books sold in 2008. But in the LDS market, only a handful of titles are mysteries.

For what it's worth, sales of fiction in the U.S. broke down as follows:

Of course, comparable numbers are not available for LDS market titles, but it doesn't take much effort to look at the titles available and see that not many titles are being produced in most of these genres. It sometimes feels like LDS fiction is composed entirely of romance novels with a few westerns thrown in.

This is particularly surprising when we consider the LDS authors who write in other genres. Orson Scott Card is clearly a first-rate author of science fiction, and is one who has let his LDS beliefs infuse his work, yet his science fiction isn't found in LDS bookstores for the most part. Anne Perry is a hugely popular writer of mysteries, although her mysteries don't involve LDS characters and situations. There are also other LDS authors who have been successful in these genres.

It sure seems like the purchasers of mysteries are attractive as buyers. Bowker's data show that on average they are wealthier than those who purchase romances. They are also slightly older, and less likely to be women.

I suspect that a part of the answer is that some Church members can't square these genres with the gospel, and complain when writers try to write LDS versions of such works. Probably the most public example of how this difficulty worked out was the controversy surrounding Richard Dutcher's film Brigham City. While certainly not a particularly violent film, given what we regularly see coming from Hollywood, it was criticized for its violence, as well as for its portrayal of evil. How, complained some viewers, could this be an LDS film with such portrayals?

I suppose mysteries are, if nothing else, about the problem of evil. The hero discovers an evil, searches for its source, confronts that source, and resolves the conflict, generally in favor of good. Along the way, the hero often is confronted by additional evil and temptation, and he may succumb to some of it.

For some, I guess this might be incompatible with what Church members should be reading.

Can you write a book in which the hero "wallows" in evil and yet have the book end up "uplifting"? My own answer is, yes, you can. But I understand that not everyone will agree.

Even if I'm wrong, there are a lot of LDS Church members who are reading mysteries and "wallowing" in evil as a result. Wouldn't it be better if they were "wallowing" in LDS mysteries instead?

Kent Larsen is a BYU graduate who lives in New York, where he owns and runs the book importer and publisher, Luso-Brazilian Books, and tries to publish LDS books as well. 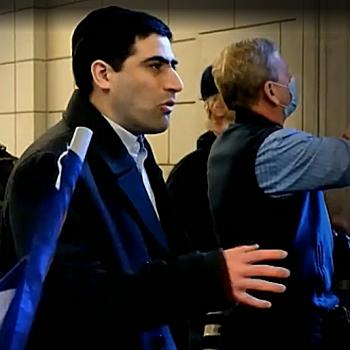 Capitol riot: racist and homophobic Jewish Press editor is out of a job
Barry Duke
2

On Being the Church: “Prepared for the Weight of Glory”
Frederick Schmidt
4

Kyrie Eleison= Lord Have Mercy
Ben Witherington
Get Patheos Newsletters
Get the latest from Patheos by signing up for our newsletters. Try our 3 most popular, or select from our huge collection of unique and thought-provoking newsletters.
From time to time you will also receive Special Offers from our partners that help us make this content free for you. You can opt out of these offers at any time.
see our full list of newsletters
Editor's picks See all columnists