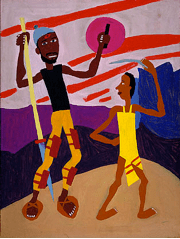 June 21 is the third Sunday after Pentecost, and Father's Day. You can read the lessons for Proper 7 of year B from the lectionary here: http://lectionary.library.vanderbilt.edu/texts.php?id=207

Last week we read about the unexpected anointing of a shepherd boy, David, to replace Saul as king of Israel. The lesson we have this week continues last Sunday's support for the underdog in the famous story of David and Goliath. The giant Goliath is of course a Philistine, a people who occupied the southern coast of Canaan and may have emigrated there by sea from further north in the Mediterranean ("Philistine" may mean "sea people.") Philistine is also the root of "Palestinian," the word used today to refer to Muslims and Christians of Arab descent who live in and around the Holy Land.

Several of the stories from the early books of the Old Testament recount Israel's ruthless defeat of Canaanites peoples throughout the Levant, and this one continues that pattern. But especially in this case, given the link between the Philistines and the Palestinians, the story is perhaps a bit more poignant for us today. What do you think this story about the defeat of the Philistine peoples can tell us about the troubled relations between Israel and Palestine in our own age? David says, "You come to me with sword and spear and javelin; but I come to you in the name of the LORD of Hosts." What does or should it mean to respond to swords and spears with the word of God for us today?

Last, this story of the tiny shepherd David slaying the giant warrior Goliath is typically taken as a lesson in the power of faith. Just like Jesus' mustard seed from last week, the small can become strong through the power of faith. But David uses more than faith here, doesn't he? He uses wit and skill and has a pretty nifty aim with that sling. What do you think this lesson tells us about the relationship between our faith in God and our God-given talents?

As with last week, Paul here continues to try to persuade the Corinthians of the legitimacy of his ministry. Like any offended friend, Paul's response is an emotional one. At other times in this epistle Paul clearly shows anger; last week he showed some defiance and also a little bit of tenderness. Here perhaps most of all Paul shows resilience and steadfastness (and maybe a little bit of snippiness in his last line).

But perhaps what is most important in this lesson is the dynamic of friendship that has emerged throughout the letter and especially here. The church at Corinth has offended Paul; rather than wait for their apology and penitence, however, Paul reaches out to them and, while defending himself, seeks reconciliation with them "in honor and dishonor."

Paul does not count himself absolutely blameless (though he mounts a good defense); rather he opens his heart as a fellow sinner redeemed in Christ and asks them to do the same. Restored relationship isn't necessarily about being in the right; it's about being in Christ. How might this insight affect your answer to the above question about responding to spears with the word of God?

As is customary in Mark's gospel, we have here sort of a quick and dirty story about Jesus that demonstrates his special power as God's anointed. Indeed, if God's anointed David could kill the giant Goliath with faith, God's messianic Son here can calm the storm in the same way. The sea of Galilee (today called Lake Gennesaret) is a large body of water that is susceptible to quick (and quickly passing) storms due to its extreme shallowness. When the wind picks up on Lake Gennesaret, waves kick up just as quickly, but then die just as quickly also as the wind dies too.

So this story perhaps is a bit of a construct. These experienced fishermen likely have ridden out many such storms. So do you think their fear here is exaggerated for effect, or do you see a reason in the text that they might be especially afraid in this case? Also interesting here is the matter-of-fact impatience the disciples have with Jesus; it's easy to forget sometimes that these men were all friends, messiah or not, and they probably got impatient with each other sometimes just like friends occasionally do.

Article Continued On Next Page
Page: 1 of 2
1/1/2000 5:00:00 AM
About Kevin Juhasz
Kevin Juhasz is a content manager with a Colorado-based marketing company and the owner of <a href="https://www.thewritecontent.net/about">The Write Content</a>, which provides writing and editing services. He has more than 25 years of writing and editing experience with websites, newspapers, magazines, trade publications and more. Kevin has covered news, sports, entertainment, technology and a wide variety of other subjects.