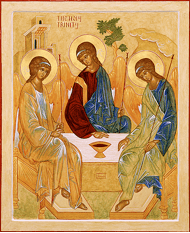 Most Protestant denominations share a common lectionary -a scheduled list of readings to be used each Sunday in worship. It's called the Revised Common Lectionary (RCL), and it assigns passages of the bible for each Sunday on a three-year cycle. Join us each week to review and study the readings from the RCL for each approaching Sunday. We'll provide scholarly commentary and historical context, in addition to links, other resources, and some questions to consider. You provide observations, insights, questions, comments, and a willingness to learn from each other on our site.

June 7 is called Trinity Sunday. It's the first Sunday after Pentecost every year, and the beginning of the next (and longest) season of the church calendar, the season after Pentecost. You can read the lessons for Trinity Sunday in year B of the lectionary here:
http://divinity.library.vanderbilt.edu/lectionary/BPentecost/bTrinity.htm

This passage from early in Isaiah is one of the most famous excerpts from that book. Indeed, many Christians will no doubt recognize the so-called Trisagion ("Holy, holy, holy is the LORD of hosts; the whole earth is full of his glory."), a hymn still in common use at worship today and which takes its inspiration from this ancient Hebrew passage. Traditionally, chapter six, verses one through eight of Isaiah, are understood as a narrative retelling of the calling of the prophet to speak God's word. Especially dramatic is the imagery of the live, fiery coal being held to the prophet's lips. From that touch, sin is erased, and presumably, power to become a prophet is bestowed. The passage ends with God's famous question, "Whom shall I send?" which is followed by the prophet's famous reply, "Here I am." Some things to think about as we continue to reflect upon the missionary lessons of Pentecost in this summer season: note that the seraphim praise God by saying, "the whole earth is full of his glory," not just Jerusalem or just Judea or just Israel. Why do you think they mention all the earth as glorifying God? Where do you think God wants to send someone? Do you see a parallel between this live coal on the prophet's lips and the tongues of flame we read about in Acts last week? If so, what meaning might we infer that being sent by God should have?

These five verses from Paul's letter to the Romans actually precede the verses on the Spirit we read last week for Pentecost. In fact, about the first half of chapter eight in Romans describes a new life of the Spirit over and against the confines of the law. As you might recognize, Paul is expounding upon a theme put most succinctly in Romans 6:23: "For the wages of sin is death, but the free gift of God is eternal life in Christ Jesus our Lord." The difference here is that Paul attempts to explain the role of the Spirit in this process here, too. Indeed, this is one of the few places in all the Bible where the relationship among Father, Son, and Holy Spirit in the Trinity begins to be described at all. How is this relationship described? What is the role of the Spirit here? Of the Son? Of the Father? Of us? What do you think Paul means that we must suffer with the Son to be glorified like him?

This famous excerpt from the Gospel of John of course includes a verse with the dubious honor of being cited proudly upon posterboards at every professional sporting event: John 3:16. And no wonder, too. The verse in question reads, of course, "For God so loved the world that he gave his only Son, so that everyone who believes in him may not perish but may have eternal life." There may not be a better summation of the whole good news of Jesus, actually. So as matter-of-course perhaps as the verse has come to be in the bleachers at football stadiums, it probably deserves the pride of place it has been given. But there's a lot more to this lesson than just verse sixteen. Indeed, the catalyst for Jesus' aphoristic summary of the gospel in 3:16 is Nicodemus' confusion over being born from above. What do you take being born from above to mean? The "water and spirit" from verse five almost certainly refers to baptism, but is that enough of an answer? What constitutes a true baptism as birth from above? Are there clues in this passage? Verse fourteen refers to a story from the book of Numbers (ch. 21) when the unrepentant Israelites are infested by poisonous snakes. On Moses' advisement, they make a bronze serpent and lift it on a pole and all who look upon it are protected from the poison. Jesus says we should regard him analogously, and of course he most probably refers to his crucifixion. But what does Jesus' death stave off for us? Not snakes of course. Then what? And the Israelites needed merely to look upon the bronze serpent; is more required of us with the crucified Christ? Last, why do you think this passage fits for Trinity Sunday? What is the relation among Father, Son, and Spirit in this passage? And why do you think they are associated here so strongly with both baptism and crucifixion?