Love Unto All Beings: Pagans and Polyamory

By C. D. Carlson - May 19, 2009
Photo by LePetitPoulailler - Licensed under Creative Commons

"And ye shall be free from slavery; and as a sign that ye are really free, ye shall be naked in your rites; and ye shall dance, sing, feast, make music and love, all in my praise."

Merry meet and blessed be, my friends. What, get back to the sex part? Okay, relax.

It's true that nothing quite piques our interest like sex. Just what are my devil-worshipping, society-destroying neighbors doing wi 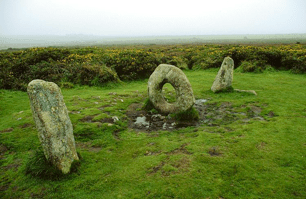 th their genitalia? I need to know! And given our national preoccupation with sex, what could be more interesting than polyamory? Polyamory is like gay marriage on crack. Not only do you get to fantasize about what two same-sex, opposite-sex, or who-knows-and-who-cares people are doing with each other-you can even imagine pool boys, masked marauders and sweaty softball players stumbling onto the scene.

Polyamory can summarily be described as the practice of openly having more than one sexual relationship at a time. The reason it is different from being single is the word "relationship"-that is, you have a committed boyfriend/girlfriend/spouse as well as other relationships. More than any other religious community, Pagans have embraced polyamory as an acceptable-and even encouraged-social practice. Philosophically, this acceptance by the Pagan community might be best understood in the context of two cornerstones of contemporary Paganism: the Charge of the Goddess and the Wiccan Rede. (Paganism is not organized on a large scale; thus, these ideas will have many variations in different paths and practices.)

In Doreen Valiente's "Charge of the Goddess," the "Mother of All Living" says, "Let my worship be within the heart that rejoiceth; for behold, all acts of love and pleasure are my rituals. And therefore let there be beauty and strength, power and compassion, honour and humility, mirth and reverence within you." Thus, the practitioner strives to ritually connect with the Goddess, albeit informally, through ordinary physical acts of lovemaking and delight. For many Pagans past and present, formal ritualized sex can be important as well. One immediately conjures up images of our forebears having ritualistic sex in the fields to ensure fertile crops and fertile bodies. In agrarian cultures, failure of the crops would mean starvation and death. Many Pagans choose to adopt elements of these cultures where sex was a good thing, a sacred thing, and wasn't necessarily kept between just one man and one woman. In this context, the practice of polyamory represents something larger than the astro-medallions and extra-wide lapels of the swinging 70s. It symbolizes a connection between our bodies, our physical environment, our myths and history, and the Ineffable.

The second tenet that helps frame the Pagan polyamory discussion is the Wiccan Rede, which says "An ye harm none, do as thou wilt." Assuming all the participants are adults, the sex is consensual, and everyone is fully informed of the circumstances, it would stand to reason that the Wiccan Rede is satisfied. Even if you don't believe that sex is sacred, then, the fact that is fun and doesn't harm anyone would be reason enough to approve of it. But is the Rede really satisfied even if the above criteria are met? On a physical level there does not appear to be any harm. On an emotional and social level, however, reasonable minds disagree. Much like the debate over same-sex marriages, many people-including many Pagans-believe that the practice of polyamory does real harm to the people involved and to society as a whole.

One such person is Rev. Dr. Kendra Vaughan Hovey, the founding Elder High Priestess of the defunct First Church of Wicca (and recent friend to Jesus). At last year's Maine Pagan Pride Day, Hovey was invited to speak at a workshop on polyamory. Once a vocal advocate for polyamory, Hovey surprised those present by coming out adamantly and fervently against the practice, saying "Everyone suffers in a polyamorous relationship - the people in the relationship, Wiccans by association, and even the entire community." Hovey lamented the lack of a formal code of Pagan ethics, but referred to the Rede's requirement that no one be harmed to help justify her stance against polyamory.

So the crux of the issue then, if you adhere to the tenets of the Wiccan Rede, is whether or not polyamory inherently does harm. And if it is deemed to be harmful, how does that stack up against the spiritual benefits alluded to by Valiente? If polyamorous sex is sacred and brings one closer to the God/Goddess, then it could be argued that an adherent has a spiritual duty to try to minimize the harm of alienation from the Deity and continue the practice. Taken to the extreme, if polyamorous behavior is pleasing to the God/Goddess it could be argued that someone who is monogamous SHOULD practice polyamory despite their personal distaste for it. Do your Pagan duty and share that Pagan booty!

The real question is, what do YOU think?

C. D. Carlson holds a B.A. in Creative Writing, a certificate in Massage Therapy, a J.D. from a top-tier law school, and is currently pursuing certification in Secondary Education. He is a true Renaissance Man, but not the kind that goes to the festivals.