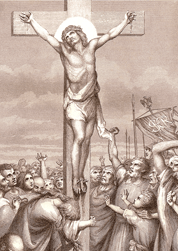 The Greek word from which we get our word "martyr" simply means to be a witness to a thing personally observed. In one of his last conversations before his ascension, Jesus told his disciples, "You will be my witnesses in Jerusalem, and in all Judea and Samaria, and to the ends of the earth" (Acts 1:8). Yet the Church has always understood that his words were not reserved to those who had been physically present with him. The first followers of Jesus called themselves "witnesses" to what they saw and learned while with Christ, but those who lived decades and even centuries later recognized that they, too, were witnesses.

Many generations of early Christians bore witness to the point of death, so many that the word "martyr" began to signify suffering or dying due to one's faith testimony. As Cyprian, 3rd century Bishop of Carthage (in modern-day Tunisia), approached his martyrdom, he wrote: "This is the baptism angels use: God and his Anointed One rejoice in it: after it, no one sins again; it is the full flower of our faith; it takes us out of this world and joins us with God. Baptism of water obtains forgiveness of sin; baptism of blood earns the crown of righteousness."

Martyrdom was the zenith of faith at a time when being a Jesus-follower was punishable by torture and death. Since then, accounts of "willing and self-sacrificing death" or severe suffering for faith have filled Christian history. Martyrs also have died or suffered due to the application of their faith to political ideals or social structures, and these too have been venerated and remembered. The list of Christian martyrs is wide and deep through time and geography, stretching from St. Stephen in Jerusalem (c. 34) and St. Irene in Thessalonica (304), to Dietrich Bonhoeffer in Germany (1945), Martin Luther King, Jr. in Tennessee (1968), and Oscar Romero in El Salvador (1980).

But what really makes a martyr? Witnesses essentially have only one task: to tell the truth. What did you see? What do you know? What happened? Yet scholars have pointed out that early Christian martyrdom involved not only telling the truth, but also enduring the hatred of those who rejected the truth. Both elements mattered - one's truth-telling and the other's hatred - and these were never in short supply.

In spite of this environment, Christian leaders disapproved of a "rush to martyrdom" and rejected the use of the term "martyr" for cases where people were murdered for dynastic or personal reasons, or when soldiers died in battles against heathens. Genuine martyrdom involves the commitment to a truth that is so overwhelmingly important that justice is better served by suffering than it is by evading it if that means abandoning the truth.

Elizabeth Castelli in Martyrdom and Memory (2004) argues that the act of martyrdom involves a relationship with a community, which gives meaning to death and suffering. Early Christian martyrs were esteemed by fellow believers who valued their truth-telling, their testimonies. Modern martyr narratives also include elements of communal remembrance. The case of a Bonhoeffer or a Romero reveals the shared creation and sustenance of martyr narratives. Those who have resisted hatred and have stood for the truth of the gospel of Christ, a gospel of peace, have spoken not only to their immediate communities, but have influenced a wide-reaching audience that must now weigh their words and their actions.

Martyrdom has represented the highest degree of sacrifice of life and liberty and has involved the presence of a just cause, self-sacrifice for the benefit of others; it relinquishes immediate or future personal benefit. Yet most of us, rightly, do not aspire to martyrdom. To suffer an untimely death or torture due to one's faith devalues human dignity and violates a basic human right. Martyrdom reveals the use of violence in the abusive exercise of power over others.

Yet, in its most ancient sense, we are all called to be witnesses, to be truth-tellers. We are today, as Jesus foresaw, at the ends of the earth. In all places - our homes, our neighborhoods, and our places of employment - we are the ones whom Christ has called to speak about what we have seen, what we have experienced, what we know. Many today, in places all over the earth, still bear witness to the point of death. Most of us will not. Yet the presence of martyrs among us - historically and presently - calls us to remember the task Jesus assigned to us.

Rakesh Peter Dass is a Christian scholar and ecumenical worker. He has extensive ecumenical and leadership experience at the local and international level. He has co-edited three books: Worship and Liturgy in New Key (2004), In the Quest for Peace (2004), and Building Communities of Peace for All (2005). Rakesh has studied religion and business and has earned a Bachelor and Master of Commerce (Nagpur University), MBA (Indian Institute of Modern Management), Certificate in Human Resources Studies (Cornell University), and Master of Divinity (Yale University). In fall 2008, he joined Harvard University as a doctoral student. His work focuses on Christian theologies and practices and the use of management tools for church growth. His research interests include Christian-Hindu comparative theology, South Asian religious history, Asian Christianity, the ecumenical movement, postcolonial thought, and faith & work practices.