On Life and Death 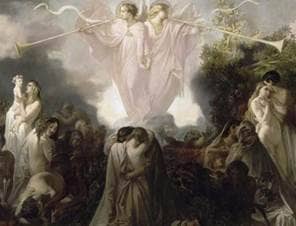 I have often been asked why I am still a Christian when I, a mother of seven, have lived through the worst nightmares a mother can have - the deaths of three children. They say my strong faith in the Lord Jesus and his Father didn't prevent the tragic killings of my son John and his wife Nancy, both brutally murdered; the suicide of my beloved son Peter, afflicted with a brain disorder; and the death of my adopted son Sterling, who did not survive a heart and kidney transplant.

But what my strong faith did for me was bring me peace, and a belief that the God I was seeking, the One I could trust, was full of love even when I didn't understand his ways. As I dealt with the pain of such tremendous loss, it was mind-blowing to me to realize that God is the Source of life and so full of love that, at one point, this Source literally burst out of love and spilled life everywhere-like sparks from some gigantic, benevolent explosion. The sun, the stars, the earth, the animals, and you and I are those sparks. We are made out of Life and Love, and so there is no real death. I will be with my beloved children again.

People told me I should want the murderer of John and Nancy executed, but God let me know that He should be the only One in control of who lives and dies, and when. And so, I remain ever opposed to the death penalty.

It was August 1993 when I got the word that my son John and his wife Nancy had been murdered in their Montana home. It turned out that the killer was 18-year-old Joseph "Shadow" Clark, the son of the people from whom they had just bought their home. After confessing to this horrible crime, he faced the death penalty.

The day I got the news of their brutal murders, I learned a new definition of torment. My beloved son and his beautiful wife were dead at the hand of someone I could only believe to be, at that moment, an agent of Satan.

I found myself screaming, sometimes aloud, sometimes with silent cries tearing at my insides. I tormented myself, wanting to know who was the faceless monster that had brought such permanent, unrelenting pain into my family. I wanted to kill him with my own hands. I wanted him dead.

But that feeling also tormented me, for now I was being tested on whether my belief in a loving God was permanent, or based primarily on human feelings and expediency.

It was when I went to Montana and stood in that room of death with two of my sons that I was overpowered with a sense of the evil I felt there. In that room, I was able to grasp the truth again that unnatural death at the hands of another is always wrong, except in a clear case of self-defense. The state is no more justified in taking a life than is an individual. Killing can't be "sanitized" by calling it "official" and "legal." My family and I were relieved when Shadow Clark took a plea bargain, and thus avoided the death penalty. He is now serving a life sentence.

I deal every day with the pain of losing three sons, and I have no formulas for how to achieve peace and find happiness. But I have learned that if we can accept the pain, the suffering, the loneliness, and the pummeling of our hearts as God's way of asking us to grow toward Him, we can find meaning in life.

If we can accept life with its sufferings as a way to a fuller realization of our capacity to be bonded to others, to nature, and to the very Source of Life, we can expand our circle of loved ones and stay conscious always of the wonder of living. If we can trust that the painful blows are vehicles for us to make straight a path to the Lord, we can find the light again that brings back the sweetness of life.

Antoinette Bosco is a syndicated columnist for Catholic News Service in Washington, D.C. and the author of 16 books, including the award-winning "Choosing Mercy, a Mother of Murder Victims Pleads to End the Death Penalty."