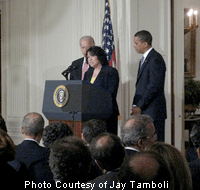 "While retiring Justice David Souter's church-state record will be difficult to replace, the Baptist Joint Committee [for Religious Liberty] hopes that President Barack Obama's nominee for the High Court, Judge Sonia Sotomayor, will do just that," said the statement posted on the BJC website Tuesday.

Although predicting the judicial activities of Supreme Court nominees is a risky business, it seems unlikely, at least with respect to the establishment clause, that Sotomayor and the President who has nominated her will place a high priority on the preservation of Souter's church-state record.

"More than any other justice," said BJC Executive Director J. Brent Walker, "Justice Souter has reflected the Baptist Joint Committee's understanding of the proper interpretation of the religion clauses and how they apply to contemporary church-state issues."

Souter's record may perfectly reflect the vision of the BJC, but neither reflects the new establishment clause jurisprudence of the Court's majority. Or of President Obama, who has warmly embraced and extended the faith-based initiative begun during the Clinton presidency. Justice Souter's separationism--which understands religion to be a private affair and which insists on rather than blurs the line of separation between church and state--represents the end, not the beginning, of an era.

Take Souter's opinion for the four dissenting justices in Hein v. Freedom From Religion Foundation (2007). Increasingly understood to be the most significant decision on the establishment clause in many years, Hein concerned a constitutional challenge to expenditures by the White House Office of Faith-Based and Community Initiatives for conferences promoting participation by religious groups in government contracting.

The majority on the Hein Court held that FFRF had no standing to sue. The vote was five to four, and there were four different opinions. The three opinions authored by the justices in the majority differ on whether they should overrule a key religion clause precedent, Flast v. Cohen, but what unites them is their suggestion that the danger of religious establishment no longer requires special constitutional vigilance. All three assert that such special treatment is the legacy of a now-anachronistic anti-Catholic bias on the Court--and in the culture at large--and therefore ought to be abandoned. The President can promote religion, they say, just as he can promote any other social policy, limited only by electoral politics. And taxpayers-as taxpayers-no longer have standing to complain in federal court.

Article III of the U.S. Constitution, which establishes the judicial branch of the federal government, provides that the jurisdiction of the federal courts is limited to "cases and controversies." These words have been interpreted to mean that U.S. courts may only rule in what are known as justiciable controversies. Unlike the constitutional courts of many other countries, they cannot give advisory opinions--that is, decide essentially political questions or rule on issues that are moot. To do these things would be to invade the provinces of the other two branches of government and thus violate the doctrine of the separation of powers. In Frothingham v. Mellon (1923), the Supreme Court held that lawsuits initiated by federal taxpayers, simply in their capacity astaxpayers, to challenge the constitutionality of congressional statutes are not constitutionally justiciable because individual taxpayers, solely on the basis of their individual tax burden, lack a sufficient personal financial stake in such matters to make them real cases.

Only one exception has been made to this rule against what are called taxpayer suits. In 1968, in Flast v. Cohen, the Court allowed such taxpayer cases specifically in order to challenge the constitutionality of congressional acts alleged to be in violation of the establishment clause. Religion is dangerous, the Court implied in 1968, and its containment requires special constitutional doctrine. Careful emphasis was placed by the majority in Flast on the evil of using any government funds whatsoever to support religion. In his concurring opinion in Flast, Justice William Douglas, in anti-Catholic language characteristic of the time, warned of the "notorious" and "mounting federal aid to schools" as well as the risk that any money given to parents of parochial school children would be given directly to "the priest."