Praying in Her Own Voice 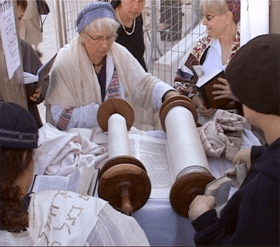 Yael Katzir's powerful documentary, ''Praying in her Own Voice,'' focuses on The Women of the Wall -- a group of Jewish women who have spent the last 20 years seeking the right to read from the Torah at the Western Wall -- Judaism's holiest site -- and who have taken their battle all the way to the Israeli Supreme Court.

Katzir's film has managed to achieve more exposure, recognition, and discussion in the last 20 months than the movement itself has in the last 20 years. Over the past two decades, the Women of the Wall's efforts have been met with attacks by Orthodox men and women at the Kotel (Western Wall) -- ranging from throwing chairs and feces, to attacks by Israeli police with tear gas for daring to seek equality at the Wall.

Katzir -- a secular Israeli -- has spent years following these women and documenting their plight, and with this film has managed to put the issue of feminism, equality, and the status of Jewish women front and center.

As prominent Israeli activist Anat Hoffman notes in the film, "Israel markets the Kotel as a symbol of unity... how can there be unity when half the population is silenced?" And, Hoffman notes, a Supreme Court ruling states that if a woman dares to read from the Torah or wear a tallit (prayer shawl) at the Kotel she can be imprisoned for seven years.

The Women of the Wall are still continuing their fight, and now the issue is gaining more traction in Jewish communities outside of Israel thanks to Katzir's film. It also helps that six prominent local female rabbis -- Laura Geller, Lisa Edwards, Sharon Brous, Lynn Brody, Naomi Levy, and Denise Eger, are all interviewed in the documentary.

Dan Katzir is Yael's son, a documentary filmmaker in his own right who lives in Los Angeles. Together with Ravit Markus and their company New Love Films, Katzir produced ''Praying in her Own Voice'' and has been touring the film festival circuit around the country with the movie.

(Dan) Katzir says that it was important to include six American female rabbis in the film, to help clarify to American audiences how important the film is. "We had one man come to the Los Angeles Israeli Film Festival screening last year and say, ‘Who cares about this film?' but when he saw that Orthodox women came to the screening and started screaming and calling the film a ‘disgrace' and had to be escorted out of the theatre, the man suddenly realized how important this film was. This [incident] took place in West Hollywood in the 21st century and it still caused a stir," says Katzir.

Reaching out to an audience beyond Israel is key for several reasons, Katzir says. "In Israel the film didn't really resonate with anyone, because there you're either Orthodox or secular. The Orthodox don't question anything and the secular hate the Orthodox, so they see the film as just another example of how primitive Orthodox Judaism is."

Most importantly, Katzir says, are the comments made in the film by Rabbi David Hartmann of Jerusalem's Shalom Institute. "He basically says the future of Judaism rests on the issue of the Women of the Wall," says Katzir. "The Judaism of today is not the Judaism of 3,000 years ago but the role of women hasn't changed in that time. If Judaism doesn't change its attitudes and adapt to the 21st century, then, according to Hartmann it will stop being a relevant religion.

"The Women of the Wall are a metaphor for this battle," Katzir notes. "They're a very clear and precise metaphor," he states, adding that even Reform Judaism, which has the most liberal attitudes towards women in Judaism, still only began to allow the ordination of women rabbis in the last 30 years.

And yet, it's only in the last year that the film has really gained a strong following, says Katzir. It took time, he says, because many film festivals felt the documentary was too controversial to be screened. "I spoke to the head of one festival and said, ‘You show films about Palestinian causes, Jewish causes, homosexuality, lesbianism, rape, and incest, but a film about the role of women in Judaism is too controversial?'"

Katzir says he hopes that the film will make people become more proactive in helping the Women of the Wall with their plight, even if Jewish women who now travel to Israel simply make a point of going to the Kotel and praying with the Women of the Wall (they currently pray in a designated space away from the main section of the Kotel).

"I also hope people come away from this film with an understanding that Judaism still has a lot of places where things need to change."