Religion on the Web - An Overview 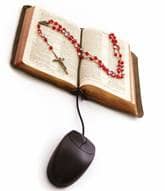 Religion on the Web - An Overview
By: Leo Brunnick, CEO Patheos

Each week here at Patheos, we will be presenting a Public Square topic that aims at the heart of what the American public cares about, about what the popular media reports, about what faith leaders preach and about what religion scholars study. And we'll be doing so in a way that changes - and elevates - the public dialogue on important religious and spiritual matters.
Patheos' inaugural Public Square topic is "Religion on the Web." Not surprising, because the issues and forces we're looking at this week are the very same ones that have brought Patheos into existence.

As many Americans as ever before think religion is important in American life, and say that they are religious and/or spiritual - about 80 percent. And yet over the past generation, they have in huge numbers identified less and less with "traditional" churches, and nearly half of them have switched or abandoned the religion of their youth.

At the same time, the Internet has increasingly become the place where we go to find information, community and guidance. It has become a vital tool to help us determine who we are. So not surprisingly, huge numbers of Americans are going online as part of their religious and spiritual life.

What are they finding when they get online? What is working and what is not? Are they finding traditional religious venues online, or is the online world creating whole new religious and spiritual experiences? (See the important distinction between the notions of "religion online" and "online religion" in Nicole Greenfield's piece below.)

Here at Patheos we will take a new topic each week and lay it out in the Public Square. And when we do so, we will have the major "traditions of thought," as represented by each of our Gateways, add their distinctive perspectives to that topic at the same time.

This kind of ongoing, keenly focused interfaith conversation hasn't been done before, and we are glad to bring it to you.

So welcome to Patheos. And this week let's talk about "Religion on the Web."