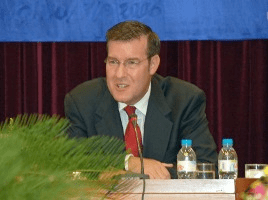 A new beginning begins. The right man at the right moment delivers a message that he embodies. For a continuing moment now -- with little precedent to encourage it -- there is the feeling that America is ready to engage Muslims worldwide with respect, celebrating not tolerating them. America, seemingly, is ready to recognize that men and women of devout faith (and none) can participate as partners in common purpose. This is good.

The speech has deserving critiques. It failed to cite the example of Egyptian President Sadat in the 30th year since his remarkable peacemaking efforts with Israel; it suggested a moral equivalency between the U.S. as a country whose democratic process and free press has called to account incidents of torture and those authoritarian countries that have institutionalized torture; it did not mention the humanitarian efforts of American NGOs that serve Muslims around the world, let alone the U.S. military interventions that saved Muslims when no one else would (e.g., Kuwait, Bangladesh, Somalia, Bosnia, Kosovo, etc); and, most critically, it did not cite the sections of the Holy Quran and Hadith that demonstrates the tangible teachings of respect for the other (e.g., the Medina Charter or the story of Negus).

Some have critiqued the speech because it was too tough on Israel; it did not address Iran in a meaningful manner; and it did not include more specific details about next steps. I understand but don't accept these arguments. The Muslim-majority world needed to hear of America's "unbreakable" bond with Israel, and that we can have constructive conversations without being called anti-Semitic. It was wise to say less about Iran and let Iranians, their economy, and their ayatollahs judge their president on 12 June. Finally, providing too many details about next steps twice defeats the purpose of the speech. If we have the answers, then why have a conversation? Second, by providing a visionary framework of interrelated pieces, it gives people around the world, especially policy-makers, a chance to consider and debate the speech, generating new ideas that might be of use in the weeks and months to come.

For example, the Obama administration has not named a U.S. Ambassador-at-Large for International Religious Freedom, let alone given him/her the mandate (per the 1998 legislation) to integrate religious freedom into U.S. foreign policy, as the Cairo speech de facto does. Such an understanding of religious freedom would also form and inform a coherent and consistent approach to political Islam worldwide -- as coordinated, in part, with the Undersecretary of State for Public Diplomacy and the new Global Engagement Directorate at the National Security Council -- beginning with a concerted attempt to understand and then engage local Islam and its understanding of justice. Our strategic and micro communications strategies, as well as our counterinsurgency doctrine, must begin here.

Next steps like these must come quickly, otherwise this speech of great expectations could result in great violence as hopes are dashed and stereotypes continue. We must pray for this president and his courage to begin a new beginning. But it will take all of us to live out the best of our faiths and values if this speech is to be truly transformational.

Chris Seiple, Ph.D., is the President of the Institute for Global Engagement, a "think-tank with legs" that promotes sustainable environments for religious freedom worldwide.