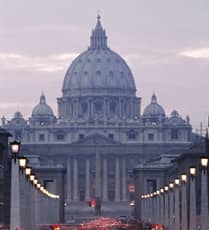 Roman Catholicism is a worldwide religious tradition of some 1.1 billion members. It traces its history to Jesus of Nazareth, an itinerant preacher in the area around Jerusalem during the period of Roman occupation, in the late 20s of the Common Era. Its members congregate in a communion of churches headed by bishops, whose role originated with the disciples of Jesus. Over a period of some decades after Jesus' life, death, and resurrection, the bishops spread out across the world to form a "universal" (Greek katholikos) church, with the bishop of Rome (originally Peter) holding primacy. The pope is the inheritor of Peter's role; today Vatican City, and specifically Saint Peter's Basilica, stands over the grave of the disciple. Catholic Christianity began as a persecuted religious community, illegal in the Roman Empire in its earliest days, but within some three hundred years and the conversion of the Emperor Constantine, it became a tolerated religion and eventually the official religion of the Empire. With the decline and fall of the Empire in the 5th century, the Church assumed both temporal and spiritual authority; it thus had enormous influence on the development of the art and culture of the western world through the Middle Ages.

Today, its growth is fastest in Africa, South America, and Asia.

Read more about Roman Catholicism and other religious paths in the Patheos Library.