Seeing Faith Through the Eyes of Others 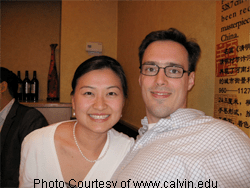 Early in my Christian experience I spent some time at a church that would have been categorized as Evangelical and fundamentalist. We were people of the Book, and we lived our lives by its teachings. I remember the earnestness with which we studied and argued over the scriptures in our Tuesday night Bible studies. The ultimate trump card in any argument was to accuse your adversary of being liberal. Liberals were that evil, amorphous group who didn't believe the Bible, didn't spend much time reading it, and certainly did not do what it said. They just promulgated their personal pontifications from the pulpit without concern for scriptural authority. In contrast, we were the faithful, living our lives under the authority of the Bible's true teachings.

What I didn't understand at the time was my own inability to get directly to what the Bible taught without some sort of interpretive lens. I allowed its teachings to have authority in my life, but they were the teachings I read with my eyes or the ones I received from my white, suburban pastor. Even when I went to Africa as a missionary, my continued theological education came in the form of the books I brought with me from the United States. I was respectful of other expressions of the Christian faith, and I even sought to steer clear of colonial-type missions. However, I didn't strive to learn from African theologians. I didn't think non-whites had much to teach me about the gospel - we, white westerners, were the authorities. We understood what biblical faith was, and we went out to the nations to teach others.

Then I met my wife's parents. For the first time I read the Bible though non-white eyes. They are first-generation Korean immigrants who work as pastors in an immigrant church, and coming into their family meant sitting under their spiritual authority. In family devotions, when they offered guidance, and when I visited their church services, I learned from them. I learned about new ways to express biblical authority in church.

Their church experience looked radically different from the one in which I had participated, and their interpretations of the Bible led them to significantly different emphases. The first difference I noticed was in the way they prayed. Rarely did they engage in the "popcorn" style to which I was accustomed, where every person prays for a peremptory minute or two. Rather, they gathered in large numbers and all prayed simultaneously - each person in the room crying out to God at the same time in his or her own voice.

I was also shocked at the amount of time they spent together as a church. They would have all-night prayer meetings, fasting retreats, and revivals, and every Sunday they shared a meal after the service. I couldn't imagine the congregation of my youth staying at church for 4+ hours every Sunday. My in-laws represented the core of Evangelical belief in their unwavering commitment to the authority of the Bible, but their faith led them to do church and experience God in different and frequently richer ways than I had previously experienced.

Since my early encounter with my wife's family, I have grown to appreciate their perspective on the church and the Bible. Their dedication to serving the broken has humbled me. Their commitment to prayer has challenged me. And their willingness to suffer in the service of others has been a living example of the life of Christ. I am fortunate to have been given a glimpse into this cultural expression of biblical authority.

But I wonder if most of my white Evangelical friends have had the same experience. Soong-Chan Rah raises this exact question in a recent book, The Next Evangelicalism, suggesting that Evangelicals are held captive to western, white expressions of biblical teaching. For example, the majority of conferences and publications put out by Evangelical leaders and institutions prominently feature the voices of white males who lead large churches in North American suburbs. Since their voices are projected from the largest platform, we might assume that they have authority to speak for Evangelicals.

The good news is that immigrant and multi-ethnic churches aren't listening. They aren't captivated by mainstream Evangelical teachings, whether writings or conferences, because they find them largely irrelevant to their context. Yet many of these immigrant and multi-ethnic churches are growing by leaps and bounds. They represent a disproportionately high percentage of the vital and growing congregations in Evangelical denominations. Apart from their numerical contribution, I wonder if the decline witnessed in many mainline denominations over the past fifteen years will be replicated in Evangelical groups as well.

So while Evangelicals claim that their only authority is the Bible, I hope and pray that future leaders will free the Bible from its captivity to white, suburban, North American teachings. I hope space on the platform will be made for leaders like my father-in-law. We have much to learn from him about what the Bible teaches.

John March lives in Edina, MN, with his wife and two children. He is planting a church in the western suburbs of Minneapolis with the Evangelical Covenant Church. He blogs at http://www.pilgrimmarch.com.