Seeking a Prayer That isn't a Pawn 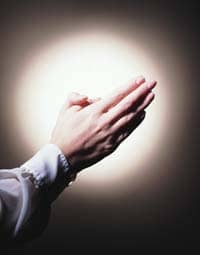 I have been needing prayer lately. Or, rather, I've been reaching for the language of prayer, as I hear about miseries of adult life: unemployment, financial desperation, premature births, bleak medical diagnoses, maddening battles with teenage sons, beloveds unreachable, beloveds untrue, and no minor clouds of darkness, pulling depressives into bed and mad men into gun stores. The shifting skies of spring offer  exploding dogwood trees and draining storms that will set us, eventually, to summer.  But for now: it feels, from my vantage, tight and anxious and aching for reprieve.

Just in time, then, we get a minor national spectacle to distract.  Maybe these are the sorts of details that fill your Internet day, but to me they are missives from an absurdist play.  While in Turkey this April, President Obama remarked that the United States is not "a Christian nation or a Jewish nation."

The Congressional Prayer Caucus replied, clamoring for a "Spiritual Heritage Resolution."  The resolution would serve to encourage national understanding "that the religious foundations of faith on which America was built are critical underpinnings of our Nation's most valuable institutions."  The resolution would also decree the formation of a Religious Heritage Week for "the appreciation of and education of America's history of religious faith." Predictably the purpose of this week would be to inscribe a chronology of Christian power, from Founding Fathers to faith-based initiatives.  Matthew Staver, dean of the Liberty University School of Law, explains: "The Founders convened a three day prayer meeting and America was born."  To President Obama, he underlines, "Yes, Mr. President, America was born on a Christian and Judeo foundation."

Amid this renewed chatter about Ben Franklin's piety, the first Thursday of May brings us the National Day of Prayer.  During the last two presidential terms, the National Day of Prayer usually involved a public event at the White House organized by the National Day of Prayer Task Force, an organization unaffiliated with the federal government but helmed by Focus on the Family leaders (who know a thing or two about smart naming practices).  Aides to Obama say that there will be a proclamation encouraging interfaith work on behalf of America's betterment, but that there will not be any East Room photo opportunity.  "Prayer is something that the president does every day," White House spokesman Robert Gibbs explained, "Privately, he'll pray as he does every day."  To this privatizing impulse, Shirley Dobson, co-chair of the Task Force, sounded disappointed: "At this time in our country's history, we would hope our president would recognize more fully the importance of prayer."

Back and forth they bandy.  Gibbs insults Dobson's beloved George W. Bush with a quick invocation of George H.W. Bush's comparative spiritual cool, and Task Force leader Brian Toon intimates that if Obama doesn't pray publicly, you too may get swine flu.  Each side sees how many halos they can accrue, how many tragedies and epidemics and psychological dynamics they can invoke to compel you to their view, to the side they  portray as more reasoned, more committed, and more patriotic holy than the other.  Of course, it's a low blow to talk about papa's imperious Episcopalian ways, and it's not precisely constitutional to prescribe religious exercises.  But we do it, as we always do it, with slogan bunting.  The Task Force has declared the theme to this year's National Day of Prayer to be "Prayer...America's Hope" and encourages a reading of scripture from Psalm 33:22 ("May Your unfailing love rest upon us, O Lord, even as we put our hope in You").  Obama, lacking still a formal church affiliation in DC, will sit in his study, his head bowed in some sort of quiet, while his cajoling counterparts from Colorado City will, undoubtedly, organize vigils and distribute informational pamphlets, demonstrations of their unfailing gift for media saturation.  "Working together as they body of Christ," reads their slogan, "to call a nation to prayer."

You don't need a degree in screenwriting to plot this pitch, and you don't need a doctorate in American religious history to eviscerate the historical invocations that follow.  The National Day of Prayer was an invention of the patriotic pandemic of the 1950s, when Truman and Eisenhower branded AMERICA within an inch of their legislative and ritual lives, certain (and certainly right) that the postwar ascendance of a geopolitical power meant that power needed to have an Image.  That image would be a keen Judeo-Christian consumer smile.  Unsurprisingly, this ‘Judeo-Christian' is set to a Protestant default, since when in doubt the reformers do win the propagandistic competition (as Exhibit A, see the Press Room for the Task Force).  Even the framing of the National Day of Prayer-emphasizing as it does not merely prayers as prayers, but prayers on behalf of others-plays at Protestant potency.

And so, lately, in phone calls and e-mails and hands held across hospital beds, I reach for words, knowing that the easiest would be, "I'm praying for you."  Easily, then, I could convey the depth of my feeling, the universality of their suffering, and the promise of redemption.  I pray for you to...be healed, be saved, be delivered, be employed, be loved again, be seen again, be respected, again.  The prayer just might deliver, and so I want to say it, say it so easily it sounds like rain.  So easily it sounds true.

I don't and can't, not for theological grounds, but on relational ones.   The irony of debates about national prayer is that they transform the experience of nationalism (worthy, perhaps) into a prescription of nationalism (failed, always).  Despite our stories plurality (or perhaps because of them), the landscape of American hope and American need has become stunningly arid, silenced by prayer box sets and by rationalist relativism.  What now to say before the dying soldier?  What now to do during an epidemic of economic dismay?  We reach for prayers, but they have become too precious by half, made by both squabbling sides something to demonstrate that you have done (he in the Oval Office, they on the sidewalk of Pennsylvania Avenue), rather than something that you seek to do.  Beyond the glare of this hollow exhibitionism, we stretch for something real, we seek a prayer that isn't a pawn.  And so I do what most mothers and fathers, lovers and workers, believers and atheists do: I squeeze the hand harder, and ask what I can do to see you better, to know you better, to serve you better.  Then (I promise, I pray, I swear, I stand), I will do it.

Kathryn Lofton is a fellow at the Center for the Study of Religion at Princeton University.