Shame and Hope in the Church 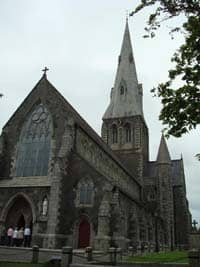 Those of us who live in Boston already know the kind of trauma that Catholics in Ireland are experiencing in the wake of the report on endemic emotional, physical, and sexual abuse that children suffered at the hands of Church-run institutions for decades. At my parish west of the city, there is a broken vessel behind the altar with a flame that is lit at every mass-a reminder of the ongoing penance that we must all undertake as a result of our failing. For those of us who are parents, it is particularly wrenching to imagine anyone's child being hurt. We have no altar servers at our parish; our own pastor was one of the accused, and even after unassailable evidence that it was a false accusation, all were left scarred by the ordeal. Some of us are close to people who suffered abuse, too, and know how hollow apologies from bishops and religious superiors can sound.

How can one reconcile one's belief in a loving God and a grace-suffused community of faith with the grim reality of endemic evil? That is both the theological and practical question. To put it more starkly: can one believe that the Church is a good institution if its people can do these things? Can one believe in the God whom its members worship? Or is the whole thing-as its strongest critics assert-a complete farce, some kind of power-play rooted in a fable?

One response, which originated just down the road at a nearby parish, is that of Voice of the Faithful, whose motto "keep the faith, change the Church" hints at a distinction between substance and reality. The faith of Jesus, the teachings of the Church over the ages-these are real, while the people coming in and out of leadership positions in the Church (neglectful bishops, abusive priests and nuns) are passing. I suppose there is some truth in this distinction; any ancient institution is larger than the people who happen to inhabit it at any given time.
Yet the issue, it seems to me, is much deeper. At the root of the Catholic theological tradition is a belief that human beings are good creations of a good God, given the gift of freedom for the sake of entering into free relationship with God. It is precisely that gift of freedom which enables us to avoid the hard work of love, to sometimes choose evil and hide it behind a façade of authority. The (Catholic) British historian Lord Acton put it most aptly: power tends to corrupt, and absolute power corrupts absolutely. What Catholics have learned all too well in recent years is that the Church is not exempt from this basic datum of human organizations.

Of course historians of the Church already acknowledge this datum. Church leaders preached the crusades and advocated for the burning of heretics and witches. Jesuits in Maryland in the eighteenth and early nineteenth century owned slaves. There are other examples, but the key point is this: the Church is a community of sinners, and sometimes the community's own structures give rise to endemic evil. In that way, the Church is like any other organization of fallible human beings.

If there is anything distinct in the Church, it is that its own first principles provide the tools for self-critique and growth. Reform and reconstruction within the Church has been a constant throughout history, from figures like Benedict of Nursia to Catherine of Siena to John Henry Newman. In every case, real reform in the Church has meant a return to its roots: the preaching and teaching of Jesus; its liturgy; the examples of its saints. The Church's shame is that it probably cannot fully heal the wounds of those hurt by abusive priests and nuns. The Church's hope, though, is that God can - even in spite of us. And our further hope is that we become more and more like God in acknowledging our failings, at the same time as we develop more transparent, responsible, professional, competent, and truly compassionate structures within our community.